From September children will have free pre-school from 3 to school age, says Reilly 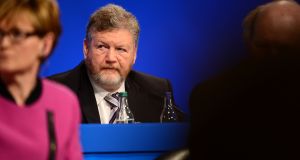 Minister for Children James Reilly has promised that from September children will have access to free pre-school from the age of three until they go to school. Photograph: Dara Mac Donaill / The Irish Times

No parent should be locked out of the workforce because of the cost of childcare, according to Minister for Children James Reilly who has pledged to increase parental leave.

Mr Reilly also promised that from September children will have access to free pre-school from the age of three until they go to school. “Capital funding will be provided to develop facilities for after school care,” he said.

He told the Fine Gael ardfheis they would do this “so that working parents can stay at home with their children during the earliest stage of their lives”.

He said the Government has developed a plan “to ensure that high quality childcare is affordable for working parents”.

Childcare had been a barrier to returning to work for many people, but the Government’s plan “sets out the destination that we will be travelling towards in the coming years if we keep the recovery going”.

Mr Reilly said “we want the best outcomes for all our children and a brighter future for all our citizens. We want to support families, rebuild our communities and strengthen our society.”

He stressed that lower income families would be able to avail of subsidised childcare. The Minister said that too often when new schemes were introduced “many who could benefit most of all, fall through the cracks”.

Children with special needs could achieve more than can be imagined “if they are given the opportunities and support they require from an early age. Let us never set a limit on a child’s horizon”.

He also said the Government was providing a range of services to ensure that children with special needs “get the support to allow them flourish also - from resourcing specialised training for staff to grants to provide appliances for children with disabilities”.

Dr Reilly warned the electorate not to “put the progress we have made in childcare at risk by changing the direction of our economy”.

Ireland has the fastest growing economy in Europe and increasing numbers of Irish people are back working in good jobs with good prospects.

“We will not sit back, we can’t take growth for granted,” he said. “We have to future proof the economy through investment in research.”

He said all the other political parties “are eager to spend the fruits of the recovery but have no plan on how to keep it going”.

Comparing the Irish economy to a marathon, Mr English said Irish people and the economy hit the pain barrier “but we have kept on going on the road to recovery”.

“Now a few miles short of the finish line to achieve full employment, who pops up at the final water station with burgers and beers encouraging you to party again but Micheál Martin, when really what you need is an isotonic drink that will steady you and keep you going.”

He said Fine Gael’s long-term plan was “the isotonic drink that will keep the economy steady and well on the road to full employment”.