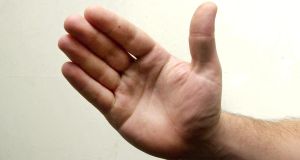 The Council of Europe ruled earlier this year that the lack of a clear ban on smacking in Ireland violates young people’s rights.

Parents will be effectively banned from slapping their children under proposals being brought to Cabinet by Minister for Children Dr James Reilly.

Dr Reilly is seeking to remove the defence of “reasonable chastisement”, which applies to parents or child carers, from common law.

However, no new offence will be created and no new laws will be introduced to explicitly ban the smacking of children.

Dr Reilly will instead ask that the defence of reasonable chastisement for slapping children be removed, leading to an effective ban.

He is expected to seek Cabinet approval, possibly as early as this week, to draft heads of a Bill giving effect to such changes.

Following a Council of Europe ruling earlier this year that the lack of a clear ban on smacking in Ireland violates young people’s rights, Dr Reilly said he would review the defence of reasonable chastisement, in conjunction with the Department of Justice.

While legislation which allowed parents to use force against their children was repealed 15 years ago, the defence still existed. Ireland has been out of step with the rest of Europe on the issue, with a ban in place in most other European countries.

“We already have laws to prevent us from hitting one another. The new initiative would prevent persons, charged under laws already in place, from having recourse to the defence of reasonable chastisement.”