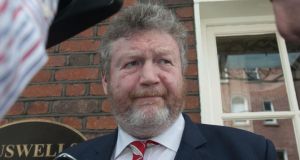 Minister for Health James Reilly has discussed several possible options with senior advisers should he lose his ministerial post, including resigning his Dáil seat

Minister for Health James Reilly has discussed several possible options with senior advisers should he lose his ministerial post, including resigning his Dáil seat.

A number of options were put to Dr Reilly, but it is understood he wants to stay in his position, according to sources close to the Minister.

The Fine Gael deputy leader has been under pressure over the medical card controversy, with backbenchers calling for him to be moved from health in the Cabinet reshuffle, which is expected next month.

The Irish Times also understands that despite warnings from Dr Reilly at the Fine Gael parliamentary party meeting this week that there is “no further room” for cuts, a plan for €650 million of potential further savings is being worked on within the Department of Health and the HSE.

As further pressure came on Dr Reilly recently, those closest to the Dublin North TD advanced options which could emerge from the reshuffle.

These include staying in health, which he is keen to do, moving to a different ministry, moving to the back benches, taking up the position of Ireland’s EU Commissioner – considered unlikely – or resigning his Dáil seat.

But it was stressed that the Minister would not take the last option and would push to retain his portfolio.

Unfinished business “So, you move him and what then?” asked one source. “Where does that leave UHI [universal health insurance

] and GP care for the under-sixes? He wants to finish the job.

“They’ve been talking about it for a while ... But if the captain tells you to move, what are you supposed to do?”

While Dr Reilly has warned there is no further room for spending reductions in the health service, senior management in his department and the HSE have been working on potential cuts.

It is understood that senior HSE and Department of Health management have been examining options for this paper over recent weeks. Sources said it was likely to include proposals for wide-ranging spending cuts as well as the abolition of some specific projects or services.

The Government has already put in place cuts of more than €600 million in the health budget this year.

Separately on Thursday, Minister of State at the Department of Health and Labour Party leadership candidate Alex White said further cuts in the health service could not be endured.

“We really have reached the end of the line in terms of cuts in our health service,” he said.