Ireland may see a political overhaul in European elections

State is set to gain two MEP seats from Brexit, while boundary changes will also take a toll 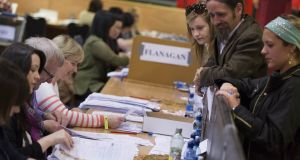 Significant changes in Ireland’s representation in the European Parliament are likely at next year’s elections as boundary changes, retirements and electoral swings take their toll.

Ireland has 11 MEPs in Brussels (and Strasbourg, to where the entire parliament decamps for a week every month). Next year’s expected departure of the United Kingdom from the EU will mean the redistribution of its 73 seats – including those held for years by senior UK Independence figures, such as Nigel Farage – to the remaining 27 countries. Ireland is set to gain two seats.

Earlier this week, the Government accepted a boundary commission report which recommended that Dublin should gain one seat, making four seats, and the Ireland South constituency, extending from Wicklow to Kerry and from Waterford to Offaly, will become a five seater.

The Midlands-North-West constituency will lose the counties of Laois and Offaly to Ireland South and will remain a four seater. It stretches from Louth and Meath in the east to Galway and up to Donegal.

The allocation of two extra European Parliament seats has prompted a flurry of speculation in the parties about likely runners for the extra seats.

But most parties will hold off on deciding their election strategy until the timing of the next general election becomes clear.

According to senior sources in different parties, sitting members of the Oireachtas will need to see whether a general election is likely in the new year before committing to a European campaign. However, party managers are likely to press for decisions before the end of the year as they prepare campaigns, especially in the huge rural constituencies.

The localised nature of much of Irish voting and the sprawling nature of the rural constituencies means that a high number of candidates is likely. However, this is a fraught balance to strike.

In 2014 Fianna Fáil ran two candidates in Midlands-North-West – Pat the Cope Gallagher and Thomas Byrne – at either end of the constituency. Combined, they won more votes on the first count than Fine Gael’s Maireád McGuinness, Sinn Féin’s Matt Carthy or the Independent Marian Harkin. But they didn’t transfer efficiently enough and ended up with no seat. The three mentioned all won seats, along with Luke Ming Flanagan. With a correct candidate strategy, there is a certain seat here for Fianna Fáil.

Fianna Fáil also has difficulties in Munster, though several senior party sources say there is “no way” that the sitting MEP Brian Crowley will be allowed stand again for the party. There has been “little or no” contact between Mr Crowley and party bosses over the last five years, during which time he has not attended the parliament at all. Finding a candidate in Cork to replace Mr Crowley will be a key task for the party.

Elsewhere in the new five-seater, Fine Gael will expect to retain its two seats, occupied by Sean Kelly and Deirdre Clune, while Sinn Féin’s Liadh Ní Riada is currently a candidate for the presidency. Fianna Fáil is eyeing a second seat here, if it can get its candidates in place.

In Dublin, the extra seat will open the door to Labour, Fianna Fáil, the Greens and Independents and smaller parties. Fine Gael’s Brian Hayes is certain and Lynn Boylan is expected to run again, but Nessa Childers intends to retire, freeing up another vacancy. Former Labour minister Alex White has indicated that he will contest the nomination, while the former Green TD Ciarán Cuffe is also likely to run.

European elections are regarded as “second order” elections, treated somewhat less seriously by voters than a general election, and therefore more likely to produce surprise results and victories for radical, non-party and outside candidates. However, Brexit is likely to raise the profile of the elections next year, which will take place on the same day as local elections at the end of May.