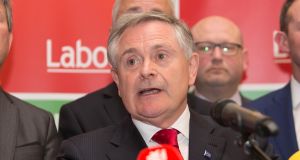 Labour leader Brendan Howlin: “Most of the Labour Party are making the assumption I have made, which is that this outfit is not a long-term solution to a government.” Photograph: Gareth Chaney Collins

Labour Party leader Brendan Howlin has called a meeting of councillors and former candidates this weekend.

On Saturday Mr Howlin will meet those who stood in the general election. This will be followed by a meeting of the elected councillors.

Mr Howlin is to assess which of the candidates are willing to stand again if another election is called.

He has stressed the Government is unlikely to last and the party must be on an election footing.

Those who wish to remain active within the party will be given positions such as spokesperson roles .

Councillors will discuss the future and the direction of the party.

It is expected some members will raise the issue of the leadership and the decision not to facilitate an election.

However, Mr Howlin said the meeting was about looking forward and how the party can rebuild.

He said: “I want to have a much more proactive role for councillors in the organisation and allow them to have a direct input into the work of the parliamentary party.

“Most of the Labour Party are making the assumption I have made, which is that this outfit is not a long-term solution to a government.

“Any wind blown against it will blow it over in my judgment. We have to be ready and we have to ensure that those who want to stand again stay connected and in touch with the party.”

The parliamentary party met on Wednesday amid criticism of Limerick TD Jan O’Sullivan for refusing to back Alan Kelly in the leadership contest. However, the issue was not raised at the meeting.