How the Economic Management Council undermines Cabinet and Government

Opinion: ‘The EMC has enhanced the role of unelected officials and advisers at the expense of those elected to govern’ 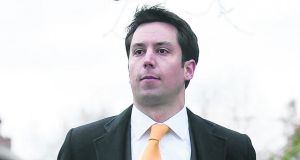 “It is interesting that the Fine Gael backbencher Eoghan Murphy (above) in his article on political reform here on Wednesday included an express call for the disbandment of the EMC and suggested its operation might be unconstitutional. He has a point.” Photographer: Dara Mac Dónaill

The ongoing Irish Water saga, in addition to exposing weaknesses in our parliamentary system and fault lines between the Coalition partners, has also highlighted the enduring dominance of the Economic Management Council (EMC) in our government system.

Having a co-ordinating committee of the Taoiseach, Tánaiste, Minister for Finance and the Minister for Public Expenditure, where key questions of economic policy can be discussed and pre-cleared before they are put to Cabinet, is not of itself a bad thing. The difficulty with the council as it continues to operate at the core of our government system, however, is that it is supplanting the role of Cabinet itself, and not just on purely economic matters. It has diminished the role of all Ministers who are not among its membership and it has undermined Cabinet government.

It has also enhanced the role of unelected officials and advisers at the expense of those elected to govern. While no political advisers or officials, other than the Secretary to the Government and the Attorney General, attend Cabinet, several political advisers and officials attend and it seems actively participate in the deliberations of the EMC.

In his book The Price of Power, published this time last year, the political writer Pat Leahy detailed the internal workings of the Coalition. He set out how Government sources described the establishment of the council as necessary to ensure a better relationship between the two Coalition parties and because of a perception that Cabinet had failed to function in the last months of the previous Fianna Fáil-Green government.

The idea, it seems, was suggested by management consultants who had provided advice before the Government was formed, as a “watchtower”-type structure, necessary to oversee the work of a disparate government system. The troika also liked the idea apparently.

Whatever about the management consultant-speak that Government advisers uttered to Leahy to justify the establishment of the EMC, the real reason for concentrating power and information within the council, Leahy later suggests, lay in the fact that, as a senior Minister put it to him, “the Cabinet leaks like a sieve”.

Indeed, in an interview with Matt Cooper on Today FM this week, Walshe emphasised how there had never been a leak from the council, suggesting again that at least from his perspective, this was the real reason why key issues are discussed there rather than at Cabinet.

Walshe also details in the book how even outside of the mechanisms of the council the Taoiseach and Tánaiste’s advisers, rather than Ministers or even civil servants, played the key role in the command and control mechanisms of government. So, for example, Quinn’s proposal to include capital assets in the test for entitlement to third-level grants was undermined at a meeting with the Taoiseach’s advisers rather than on foot of any Cabinet discussion.

Although it was originally justified as a necessary measure to address the urgency of the economic and fiscal crisis, the Government resisted suggestions when the bailout ended that the EMC should be disbanded. Not only does it endure, it seems the council is getting more powerful and now has an even broader scope.

This month the EMC rather than the Cabinet is the forum for key Government deliberations on how the system of charging for water might be revised. We have been told that Minister for the Environment, Alan Kelly, as the relevant Minister on water policy, and Minister for Communications and Natural Resources Alex White, whose department is responsible for parent company Irish Gas, have been given right of audience this week and last at the council to discuss the water charges situation.

It is interesting that Fine Gael backbencher Eoghan Murphy, writing on political reform here on Wednesday, included a call for the disbandment of the EMC and suggested its operation might be unconstitutional. He has a point.