How Labour’s Derek Nolan feels after losing the election 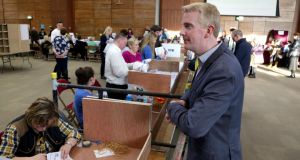 Early on Saturday morning it was clear that my Dáil career was over. I had known for years that the fight would be difficult but it became apparent in the last week of the campaign that the game was up.

So even though the phone call at about 10.30am brought no surprise, it was still a bit of a shock. No matter how much I had prepared for the worst, there remained a modicum of hope that could not be quelled. Saturday morning crushed it.

The same phone call five years earlier was much different. Within minutes of the boxes being opened it was clear that my election was guaranteed. It was a remarkable day. The joy of my supporters, the messages of goodwill, the congratulations, celebrations and sense of pride and achievement. I’ve never had another day like it and I imagine I never will.

Those feelings followed me to the Dáil a few days later. Walking through the gates was magical. The facade of Leinster House is more imposing in reality than on television and, though I had been there a handful of times before, walking in as a TD was special. I never lost that feeling. Driving into the Dáil, sitting in the chamber or walking the corridors filled me with pride during the entire five years.

I was 28 years old on election day in 2011 and I looked quite young too. It was joked around Galway that my election poster looked more like a confirmation photo. I never felt that my age was a disadvantage, however.

But being elected at a young age did have its disadvantages. I was unprepared for the impact of the job on my personal life. The rigours of the work, the time commitment and the public aspect of it can actually be quite alienating – making it at times a lonely profession and certainly one where it was hard to maintain friendships outside politics. And there were other quirks.

I tried to buy a home early in the term only to be turned down for a mortgage on the basis of poor job security. The bank might have had a point.

Figuring out how to be a TD took time – at least half the term. As a backbencher the agenda you follow is largely set by yourself. As a government TD you soon realise that influence is wielded not in the Dáil chamber but in ministers’ offices.

I had successes both locally and nationally. The establishment of the working group to reform the system of direct provision was my idea and I am particularly proud of the direction it has laid out.

It turned out to be a very difficult five years. While the work was satisfying and rewarding I was quickly greeted by regular protests at my office and once outside my parents’ home.

The Labour parliamentary party of 2011, particularly the new intake, were incredibly idealistic. To many of us, people such as Eamon Gilmore, Ruairí Quinn and Pat Rabbitte were not colleagues but political heroes we had watched on television and admired for years. We accepted their leadership and answered the call to put the country first and party second.

And while it was the right thing to do and I don’t regret it for a moment, I was probably too deferential in those early days and also a little naive. Naive in thinking that we would be thanked for it and foolish for thinking that facts, reason and rational discussion would convince people of our virtue.

That’s why I leave the Dáil more disappointed at the overall result for the Labour Party than for myself. I joined the party in college and am what might be classed a “true believer”. My beliefs on social justice, equality and solidarity are very much intact. Seeing Labour’s Dáil representation decimated and so many good colleagues lost is heartbreaking. It will be a crowded Dáil in which the party must now make its voice heard.

Looking back on the last five years I have very few regrets. It has been my greatest privilege and honour to have represented my home town and county in Dáil Éireann. I was asked by a Galway journalist last Saturday what I planned to do next. “Look for a job,” I told him. He looked surprised, as though such mortal concerns were beyond those of a former TD. Alas not.

At 33, I’m probably in a better position to start something new than a lot of my colleagues. And, to be very honest, that challenge is also exciting. The great thing about democracy too is that there will always be other elections for Labour to fight and for Labour to win.

Derek Nolan was a member of the Public Accounts Committee during the 31st Dáil. He qualified as a solicitor shortly after his election in 2011. He holds an LLB degree and a master’s degree in human rights law