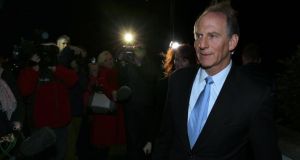 US diplomat Dr Richard Haass is this Christmas considering whether he should return to Northern Ireland at the weekend to try to complete an agreement on the past, parades and flags before the talks deadline of New Year’s Eve.

Dr Haass and his American talks team including Harvard professor Meghan O’Sullivan flew home to the United States out of Dublin this morning after late night/early morning talks with the five main Northern parties failed to produce an agreement.

Negotiations concluded this morning at about 4.30am after almost eight hours of talks with progress made but with no final meeting of minds by the five parties of the Northern Executive - the DUP, Sinn Féin, the SDLP, the Ulster Unionist Party and Alliance.

Dr Haass said he was prepared to return at the weekend if he felt an agreement could yet be achieved. Over Christmas from the US he will send the parties a fifth paper on a possible way forward.

He will also pose a number of questions to the parties and based on their answers will decide whether it would be worthwhile to return.

His comments early this morning indicated he was minded to fly back to strive for a deal sometime before midnight on New Year’s Eve. His colleague Dr O’Sullivan has said that it will not be possible for them to engage with the process beyond that time.

Of the value of an agreement Dr Haass said: “The real question to ask is whether the people of Northern Ireland would be better off with it and I would simply say that I don’t think it is a close call, I think it is a clear call that if agreement were adopted that it would leave people individually and society as a whole far better off than we would be otherwise”.

“We don’t have agreement,” he added. “In no way have we given up on the possibility of reaching agreement before the end of the year. We are not going to be able to put it underneath anyone’s Christmas tree but again we still have a week.”

Dr Haass said the work carried out on the past both intellectually and politically was “truly significant” while there was “important work” done on parading. “Yes, it’s true that the work done on flags is quite disappointing by any measure but the other two areas are quite impressive and I think it “would be a real shame not to turn that work into a reality”.

Currently the proposal on flags is to establish a commission on identity, culture and tradition which would have until sometime in 2015 to report on a way forward on flags. He has also proposed that this commission would deal with the Irish language and a bill of rights for Northern Ireland.

On the past it is proposed that a single investigative body be created which would continue to inquire into Troubles-related killings. This would replace the Historical Enquiries Team and also take over historical investigative work currently conducted by the PSNI and the Police Ombudsman.

A separate “commission for information retrieval” is also proposed. This would allow for “limited immunity” to those who were willing to provide information to victims and survivors about killings in which they were involved. Victims would have the choice of whether or not they participated in this process.

One of the hurdles on the past is how to deal with narrative of the Troubles with some unionists demanding that Sinn Féin accept that the IRA conducted a “campaign of terrorism”.

Unionists are also understood to be resisting calls for a structured examination of British army and RUC collusion in loyalist and other killings and how far up the political chain of command that went.

On parades it is proposed that the Parades Commission be replaced with another body to adjudicate on contentious marches. This would have a mechanism where decisions could be appealed.

DUP negotiator Jeffrey Donaldson MP said people were disappointed a deal was not achieved. He said differences remained over the three areas. “I think with further effort we are capable of closing the gap,” he said.

Sinn Féin negotiator Gerry Kelly MLA said he was disappointed with the outcome and believed that a deal could have been done. He saw potential for a deal by the deadline of December 31st.

SDLP negotiator Alex Attwood MLA said: “Whilst we haven’t got a Christmas Eve deal we can still achieve a New Year’s Eve deal and that is the purpose of the next week.”

The Ulster Unionist Party leader Mike Nesbitt agreed a deal could still be done by the deadline.

Alliance Party deputy leader Naomi Long said while the process was not dead it was on “life support”.