Government urged to raise abuses despite risk of damaging ties 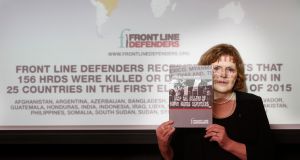 Ireland should speak up more strongly against human rights abuses in countries where it has political or strategic interests, an advocacy group has said.

Front Line Defenders said the Government was slow to raise the repression of human rights workers in countries such as Ethiopia and China for fear that it might jeopardise bilateral ties. This reflected a wider problem in the European Union, which applied different standards to strategically important states.

“The EU are very happy to raise cases in Burundi or Belarus because they don’t have interests there. When it comes to countries like Ethiopia, China, Mexico or Azerbaijan it’s a different story. It’s a case of ‘go easy on your friends and dump on your enemies’,” said Front Line executive director Mary Lawlor.

She was speaking at the publication of the organisation’s annual report, which showed 157 human rights activists were killed or died in detention in 25 countries last year. Some 45 per cent of the murdered activists were linked to the defence of environmental, land and indigenous people’s rights. Other groups targeted included those working on corruption as well as journalists and others who used the media to denounce abuses.

Ms Lawlor said that in Ethiopia, the government used terrorism as a pretext to target human rights activists and subject them to harassment and imprisonment.

Ireland has had a close relationship with Ethiopia since 1994 and had “substantial financial involvement” in the country through its overseas aid programme. “However, the embassy is reluctant to raise cases in case it interferes with its development work,” she said.

In China, human rights activists faced intimidation, harassment, house arrest, abduction, torture and imprisonment. “We are not aware that Ireland has taken up any cases of human rights defenders with the authorities, and the EU rarely takes action,” Ms Lawlor added.

Front Line urged the Government and other EU member states to adopt a policy of automatically condemning the killing of human rights activists as they occurred. It also said the protection of such workers should be pushed higher up the international policy agenda.

“We all know that foreign policy is much bigger than human rights, but we see no reason why governments who have become members of the UN, who have accepted international standards, cannot be spoken to about these extreme violations of human rights,” Ms Lawlor said.

“Governments have thick necks - they’re able to take a bit of criticism. This should be part of the ongoing relations. Human rights should never be sacrificed [FOR ]trade.”

The organisation’s deputy director Andrew Anderson said foreign policy chiefs in Europe and the United States too often turned a blind eye to the repression of human rights workers in countries such as Bahrain, Egypt, Saudi Arabia and the United Arab Emirates.