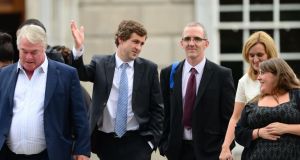 The Government has narrowly avoided an embarrassing defeat in the Seanad when the casting vote of Cathaoirleach Paddy Burke was required to defeat a Fianna Fáil motion on organ donation.

The two Fine Gael senators who lost the party whip over the abortion question, Paul Bradford and Fidelma Healy-Eames, sided with the opposition and voted against the Government.

Their stance may raise the possibility of further disciplinary action being taken against them by Fine Gael.

The outcome of the vote was 22 to 22 when it was called at 2pm at which stage Mr Burke sided with the Government in his casting vote.

The Upper House was recalled today for an emergency session in the middle of the summer recess to discuss the directive on organ donation, which was transposed into Irish law in August 2012 without being debated in the Dáil or Seanad.

Minister of State for Health Alex White told the chamber that no case had been made of any strength why the legislation should be annulled.

He specifically refuted a contention by Fianna Fáil senator Mark Daly that it was “flawed legislation that is disastrous”.

Fianna Fáil leader Daragh O’Brien criticised Minister for Health James Reilly “did not see fit to come into the House” and Mr White had to stand in his stead.

The Seanad was recalled after Fianna Fáil senator Mark Daly secured the signatures of 20 Senators to force the special sitting, employing provisions of the 1972 legislation that gave effect to Ireland joining the European community.

Sen Daly has claimed the directive as applied by statutory instrument is flawed and should have been scrutinised by the Oireachtas rather than signed into law directly by Minister for Health James Reilly without any consultation.

However, a number of deputies on the Government side described Mr Daly’s move as a “stunt” and “opportunistic”, arguing that Fianna Fáil has had a whole year since the directive was signed into law in August 2012 to bring up the issue, but spurned the many opportunities afforded in the Seanad over the past year.

The independent senator Jillian van Turnhout said she supported Mr Daly’s similar attempt to seek an emergency session last summer but said this recall reminded her of the way in which the Bobby Ewing character in Dallas had forgotten an entire year.

However, a number of senators on the Government side, including Jim Darcy and Martin Conway, have said that the recall has had the effect of highlight the issues surrounding organ donation in Ireland and may have accelerated Government action in that regard. Mr Darcy and others referred to the necessity for the Human Tissues Bill, to be dealt with as a matter of urgency.

In another reference to Dallas, Prof John Crown changed its famous phrase ‘Who shot JR?” to “Where is JR?”, a reference to the absent Minister for Health James Reilly.

Several senators also referred to the recall as useful in emphasising the important role of that the Seanad can play, especially in relation to scrutinising EU legislation.

Averill Power of Fianna Fáil and Paul Coghlan of Fine Gael both argued for that role in the course of their speeches.

Fianna Fáil leader in the Seanad, Darragh O’Brien, opened the debate outlining his criticism of the current arrangements for organ transplantation and donation. He said the national office which oversees donation has only a sixth of a principal officer position available to assist its director Dr Jim Egan.

He said best practice elsewhere indicated that the best set-up was a single national transplantation authority as well as coordinators for organ donation in each hospital. Fianna Fáil has argued that Dr Reilly had availed of a clause in the Directive that was designed for Britain to back away from setting up a single authority, and instead share the competencies between the HSE and the Irish Medicines Board.

He asked Minister of State Alex White, substituting for Dr Reilly who is on holiday, why the Government had decided against setting up a transplantation authority. He said the Directive in the main was positive but that the Government had set aside the most important point without consultation.

“There is a problem there and it needs to be addressed,” he said.

He was one of several contributors - Dermot Wilson was another - who said that there were 24 specific organ donor coordinators working in Northern Ireland, whereas there were none in this State.

Senator Feargal Quinn, who seconded the motion, said he was puzzled a the length of time it takes to get things done in the State. He pointed to an analogous Bill on organ transplantation he table in 2008 that had been delayed and ultimately discarded.

Responding for the Government, Leader of the Seanad Maurice Cummins argued that Fianna Fáil had had ample opportunities both through private members’ motions and adjournment debates to highlight this issue before but had not availed of those opportunities.

He defended the current set-up with particular praise for the role that the Irish Medicines Board has played.