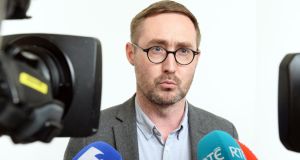 Dublin Mid-West TD Eoin Ó Broin said measures introduced by the last government to halt excessive rent increases had failed and rents are now higher than they were at the peak of the Celtic Tiger. Photograph: Eric Luke / The Irish Times

The Government is to link funding for local authorities with their performance on providing social housing.

In the programme for partnership agreed between Fine Gael and Independent TDs, it is proposed to link exchequer funds with their “estate management”.

The new Government said this will incentivise local authorities to return more social housing units. It said it will publish regular statistics on their performance.

The Government is pledging to secure €10 million to complete the 668 unfinished housing developments across the country and to examine all existing housing stock to assess if it can be refurbished for reuse.

Rent supplement and the housing assistance payment will be increased by 15 per cent, as agreed with Fianna Fáil.

In a series of proposals on housing, the Government also commits to developing a low-cost rental option for low-income families.

This would see the State fund low-rent accommodation and limit providers to only charge a rent that is sufficient to cover current and capital costs.

The party produced a Rent Certainty Bill yesterday which would allow for any rent increases or decreases to be subject to the Consumer Price Index.

Dublin Mid-West TD Eoin Ó Broin said measures introduced by the last government to halt excessive rent increases had failed and rents are now higher than they were at the peak of the Celtic Tiger.

“Linking future rent reviews to the Consumer Price Index would create a level of stability in the market and prevent dramatic increases or decreases in rents,” he said.

Mr Ó Broin said the proposed legislation will be beneficial for both landlords and tenants.

“Too many families who should be living in council housing are instead forced to live in the private rental sector subsidised by the State.

“This is adding additional pressures on the rental market,” he said.

People Before Profit also called on the Government to introduce rent controls immediately.

Richard Boyd Barrett TD said: “I am calling on Simon Coveney, as his first act as housing minister, to intervene in this dire situation and immediately introduce rent controls so that we can halt the ever increasing cost of rents and increase the rent allowance by 28 per cent.”

He said his party would introduce legislation to cap rent increases at 10 per cent and would link any hike to a geographical area.