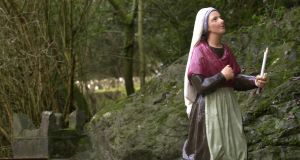 The grotto beside the church where 15-year-old Ann Lovett died with her baby. Photograph: Brenda Fitzsimons

A slim file on teenager Ann Lovett in the State Papers for 1986 said the government received reports on her death from the minister for health and education less than a month after she died.

Neither report has been published.

The 15-year-old schoolgirl from Granard, Co Longford, died after giving birth beside a grotto to the Virgin Mary on January 31st, 1984. Discovered by friends with her dead baby, she bled to death before an ambulance arrived to take her to hospital.

The file contained a series of cut-outs from newspaper reports at the time and a brief handwritten note, dated February 7th, 1984.

“Government received a report from Minister for Health and Education; expressed sympathy with the parents and family; in so far as an inquiry is concerned, there will be an inquest,” the note said.

In an apparent reference to media coverage, the note also said “great personal tragedy which should not be compounded by particular kinds of attention”.

“The minister for health mentioned certain further facts which had come to light since his first report. The course of action to be followed by him was agreed.”