‘War chests’ for spring vote will be greater than amount spent in 2011, parties confirm 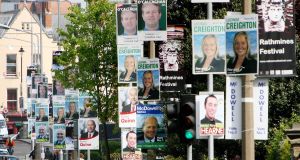 Spending by parties and candidates in the general election campaign will exceed €10 million, according to sources. File photograph: Niall Carson/PA

Spending by parties and candidates in the three-week general election campaign in the spring will comfortably exceed €10 million, sources from all the major parties have confirmed.

Parties are working on the basis their campaign “war chests” will be greater than 2011 when spending topped €9.2 million during the three-week campaign.

It is likely the amount spent could return to the levels of the last pre-recession general election, 2007, where spending exceeded €11 million, although at least one party said privately it might have to borrow funds to do so.

The traditional big two parties, Fine Gael and Fianna Fáil, have each raised in the region of €1 million in voluntary funding every year since the general election of 2011.

Most of the difference was attributed to a sharp fall in trade union afilliation fees.

“We are in good shape and look like we will be in around where we were in 2011 [on spending],” a senior Fine Gael strategist said.

A Labour counterpart said: “We will have no big problems on the money side when it comes to the election.”

A Fianna Fáil source said most of the funding it raised voluntarily was ringfenced for election spending and the party was in “good shape”.

These funds are in addition to State funding for each party: Fine Gael, for example, receives almost €5 million in funding from the Exchequer for its party and parliamentary activities annually.

However, parties are not allowed to spend this funding for electoral purposes.

There are disclosure rules and limits on electoral spending but they only apply from the time the Dáil is dissolved until polling takes place, about three weeks.

Parties are free to spend what they want before that period.

Before the 2011 election, it was estimated that parties spent up to €4 million on “early election spending”.

For example, in this cycle, Sinn Féin has erected election posters on billboards featuring its three leading TDs while Labour has launched two video campaigns on social media under the banner of labour.ie/better.

For the first time, in this coming election, a significant portion of campaign spending by parties will be migrating online away from traditional sources such as TV and print advertising.

In 2011, Fine Gael was the biggest spender during the three-week window, with an outlay of €3.1 million.

Fianna Fáil and Labour spent about €2 million each while Sinn Féin spent €500,000.