Former detective to appeal any denial of Smithwick Tribunal costs

Decision to deny costs to Owen Corrigan would be challenged, counsel warns 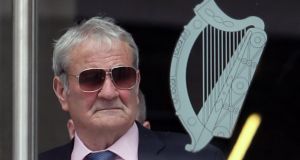 Any move to deny a former Dundalk-based detective sergeant his legal costs for eight years at the Smithwick Tribunal, would be challenged in the High Court, his counsel warned yesterday.

Addressing a special sitting of the tribunal on costs yesterday Jim O’Callaghan SC for the former detective Owen Corrigan said if the tribunal required direction on costs, it could seek a direction from the High Court.

But he told tribunal chairman Judge Peter Smithwick any attempt to deny costs to his client, was “arbitrary” and “capricious” and would not stand up in law. He said he would challenge such a decision.

Mr Corrigan was a key witness at the Smithwick Tribunal which investigated allegations that members of Dundalk gardaí colluded with the IRA in the March 1989 murders of RUC officers chief supt Harry Breen and Bob Buchanan.

Last month the tribunal report found Mr Corrigan had passed information to the IRA, but said it had found no evidence he had done so to assist in the murder of the RUC officers.

The tribunal found that on the balance of probabilities somebody unknown inside Dundalk Garda Station had tipped off the IRA about the movements of the men on the day they arrived for a meeting with a senior garda.

At the start of yesterday’s tribunal hearing senior counsel Justin Dillon said the proposal to deny Mr Corrigan his costs was related to his “point blank and unambiguous refusal” to provide full details of his banks accounts.

Mr Dillon told the hearing the tribunal had written to Mr Corrigan to the effect that as a consequence of his failure, it had proposed “he shall not have the costs borne by the taxpayer”.

Mr Dillon recalled that on day 131 of the tribunal hearings Mr Corrigan was asked if he was refusing to assist the tribunal any further with its inquiries into his personal bank accounts.

Mr Corrigan had replied: ”Yes. I am not going to hand over my bank accounts to you and that’s it”.

Mr Dillon told Judge Smithwick there was also the finding that Mr Corrigan had passed information to the IRA. He said the tribunal had discretion to decide what proportion of legal costs, if any, should be withheld.

However, Mr O’Callaghan said it would be “irrational and unfair” to Mr Corrigan not to allow him his costs over eight years, and “grossly disproportionate” to the level of co-operation provided. He also said such an order would constitute bias against Mr Corrigan and no other party who was granted legal representation, was denied costs.

Mr O’Callaghan told Judge Smithwick “you cannot rely on your finding that Mr Corrigan passed information to the IRA”. Nor could the judge penalise him in this way for failing to voluntarily disclose his financial details, he said.

He said if the tribunal was minded to deny costs there was another option, that it could seek a direction from the High Court on what it might do, in relation to costs.

Judge Smithwick said he had “not made any decision”. He said “my mind is not made up” and he reserved his decision to a later date.