Flanagan surprised by Foster’s claim of ‘poaching’ investors from North 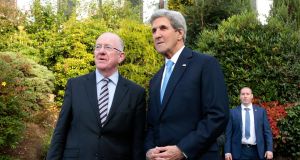 Minister for Foreign Affairs Charlie Flanagan has said he was “very surprised” by comments made by Northern Ireland First Minister Arlene Foster about the “poaching” of jobs for the Republic at the North’s expense.

Mr Flanagan also said on Sunday he was “very concerned” about Mrs Foster’s remarks that political instability in the Irish Government, rather than concern for Northern Ireland, was driving the State’s stance over Brexit

Dublin made during her first address as party leader to the DUP’s annual conference on Saturday.

The Minister was asked about Ms Foster’s comments during a joint press conference in Tipperary with US Secretary of State John Kerry.

“I’m very concerned at allegations that representatives of the Irish State were in any way poaching business or investors.”

Mr Flanagan said he spoke on Saturday evening to the North’s Minister for the Economy, Simon Hamilton, to express his concern over the comments.

“We need to work together. We have to work together, in order to ensure the economic and social prosperity for all the people on this island. That is the priority of our government.”

Mr Kerry, who was in Tipperary to accept this year’s Tipperary International Peace Award at Aherlow House Hotel, said that when dealing with Brexit “people need to be really careful with downstream consequences… one choice can have an impact on other aspects”.

He said “how that border access is managed” needs to be done “very thoughtfully and very sensitively” so it doesn’t impact on trade within the island.

During her speech Mrs Foster said political instability rather than concern for Northern Ireland was driving the Irish Government’s stance over Brexit.

The Stormont First Minister said relations with the Irish Government were as good as they ever had been and she would continue to work with the southern neighbours.

But she told delegates at the DUP annual conference near Belfast relations with the EU were much less important than the benefits derived from being within the UK.

“The reality is that political instability in Dublin, and fears for their own future, are driving their decision-making at present as much as any concern about Northern Ireland.

“And while they seek to take the views of people of Northern Ireland on the issue of Brexit at home, their representatives are sent out around the world to talk down our economy and to attempt to poach our investors.

“It is clear, conference, that the one place that a hard border does exist is in the mind of the Irish Government.

“Well, I don’t believe in a hard border and am happy to welcome shoppers looking for a bargain from across the border any time they want to come.

“And I am quite confident that the investment offer that will be available, both now and in the future, will mean our reputations as a place to invest will continue to grow.”

Mrs Foster was addressing her first party conference as leader. She replaced Peter Robinson in December. The DUP retained its position as Northern Ireland’s largest party in the May Assembly poll. The party campaigned for Brexit in the June referendum.