New agency to be established next year 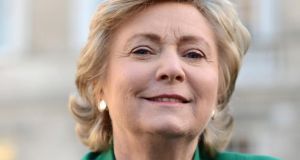 Given that Taoiseach Enda Kenny has already said a Cabinet reshuffle is on the way next year, you would expect Ministers to insist they are busy in their briefs.

In Minister for Children Frances Fitzgerald’s case, she also has to fight against an occasional whispering campaign that her portfolio should be put back to the junior ministerial ranks, where it was before this Coalition was formed.

Unsurprisingly, Ms Fitzgerald dismisses such talk and notes a substantial body of work still ahead of her.

“We have a Department of Children and Youth Affairs and every time we are having a discussion at Cabinet in relation to whatever range of issues, there is an interaction from my department. I think the department is established now and should remain, and we have made the case and I think that is accepted around the Cabinet table.”

After seeing the Children’s Referendum pass in 2012, she may have felt her biggest challenge was behind her.

However, in 2013 Ms Fitzgerald has had to deal with other substantial issues, such as the fallout from a Prime Time investigation in May into the alleged mistreatment of young children in three creches in Dublin and Wicklow.

This landed the Minister in a political storm, one which led to new standards for creche inspections, but when asked what she sees as the remaining challenges of her term, if she serves the full five years, the Dublin Mid West TD mentions an initiative that will soon come to fruition.

She cites the establishment of the Child and Family Agency, which is due to take over responsibility from the HSE for some 4,000 staff involved in children’s service.

“I just signed the establishment of the new agency,” said Ms Fitzgerald. “Establishment day is January 1st . . . We will be launching it around January 22nd. Setting up a dedicated agency is important, implementing that is critical. Getting standards in place so . . . you get services and it’s a high standard and it delivers.”

Other issues in her in-tray include dealing with spiralling childcare costs and the Children First legislation, which provides for mandatory reporting of concerns about child-protection issues – all of which mean she is keen to stay in her post. But like all Fine Gael Ministers, she serves at the pleasure of Enda Kenny.