First time voter: Do migrants even matter to politicians?

Meet the Voters: ‘Nearly 100,000 migrants are eligible to vote. They could make a huge impact’ 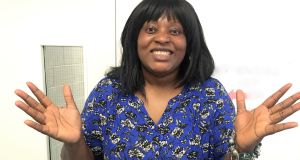 Carol Azams: Got her citizenship in 2015 and is looking forward to voting.

Carol Azams is originally from Nigeria and moved to Ireland in 2002. She lives in Blanchardstown, is married with five children and was granted Irish citizenship in 2015. She says homelessness is always on her mind because she is renting and hopes the next government will pay more attention to the needs of refugees and migrants. This is her first time voting in an Irish general election. Read Carol’s full profile hereThe election campaign is getting hotter by the day as politicians clamour to get the choice of the people.

I keep changing my mind about who to vote for, but hopefully I’ll have made a decision by next week! People are just looking for sincerity in politicians’ promises.

As head of the Government, the credibility of the Labour Party and Fine Gael is more at stake. They’ve done well in some areas but if they keep repeating their promises. They are only reminding voters of the areas where they’ve failed before.

I haven’t been canvassed on my doorstep yet or been approached on the streets but I’m looking forward to having a nice little chat with a candidate so they can tell me why I should give them my vote.

Perhaps we can even share a selfie. I’m just waiting to hear that knock on my door.

I want to ask candidates what are their plans for migrants in Ireland. I have seen some party manifestos promise to regularise undocumented migrants and introduce an immigration act to rectify areas such as family reunification. But many other issues remain untouched.

Nearly 100,000 migrants are eligible to vote in this election. These people could make a huge impact on the results. We demand direct engagement from politicians. We want action to follow their promises.

The presence of politicians is not felt at all by the migrant community. Do we even matter to them?

Carol Azams was in conversation with Sorcha Pollak as part of The Irish Times Meet the Voters series, profiling 10 sample voters in a bid to track the impact of the 2016 General Election campaign on their voting intentions. Follow them at irishtimes.com/election-2016/meet-the-voters

1 Why Sinn Féin will not call the State by its name
2 McDonald rejects idea SF public meetings ‘an affront to democracy’
3 Investigation into Dublin housing charity launched
4 Irish health officials to ramp up precautions against coronavirus
5 Garda warning after €500,000 of ‘movie money’ found in circulation
Real news has value SUBSCRIBE