Fine Gael shows signs of urgency - or is it panic? 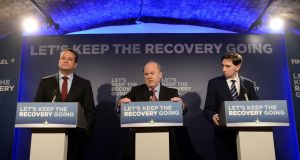 Let’s paint a scene. A party in the Irish general election decides that the main plank of its policy is to develop a nuclear bomb and declare war on the rest of Europe.

After making the announcement, the leader invites questions from the media at the press conference.

After making the dramatic announcement, the first question at the press conference is: “That new policy is all very well, but given the latest opinion poll, would you completely rule out going into coalition with Fine Gael or Fianna Fáil?”

It’s been that kind of election campaign - it has been flat. The issues and promises - no matter how expansive - have played second fiddle to the opinion polls, which have led everything by the nose.

Subsequently, the most recurrent questions have all revolved around what Micheál Martin calls “coalitionology”.

The polls suggest a very undecided electorate. Yesterday we saw signs of urgency, or was that panic?

Michael Noonan launched an all-out assault on Fianna Fáil, accusing it of a “massive deception”. The basis of his claim was Fianna Fáil had not kept enough in reserve in its economic plans to cater for public pay increases. Here is our report on it.

Was this Noonan trying a Brian Cowen moment? That was the intervention in 2007 by the-then Fianna Fáil finance minister whose hugely effective attack on Fine Gael’s economic plans swung the election in Fianna Fáil’s favour.

Suggesting there is a concerted move to pump up the attacks, Leo Varadkar launched a vituperative attack on Micheál Martin’s record as minister for health.

He also made the ludicrous claim Fine Gael might not be the biggest party. Predictably, Micheál Martin hit back.

For weeks, people have expected a swing or at least a decisive trend. But it hasn’t happened. There has been small slippage or incremental increase by parties or groups. But this election has become a muddy track in which they have all become rutted.

The message from the polls is the bigger parties need to do something dramatic to inject some impetus into their campaigns.

There is a belief that a fair proportion of those in the ‘independent’ category are floaters who might plump for an orthodox party. These floaters have not fastened yet because they have yet to engage, or to make up their minds or are not yet convinced by any of the messages.

But they have been saying that for many weeks now. Perhaps, the unthinkable is happening, and volatile is the new normal. If that is so, multiple elections, hopelessly hung parliaments and exotic coalition arrangements will quickly become the norm.

One of the truly memorable moments of the 2011 election campaign was the full TG4 debate in Irish between the three party leaders.

All three were proficient Irish speakers, and the exchanges were as lively and robust as any of the English-language debates.

Since then, Sinn Féin has come into the reckoning as a major party. In addition, Eamon Gilmore stood down as leader of Labour in 2014. Neither Gerry Adams nor Joan Burton have sufficient Irish to hold their own in a debate.

Both parties put forward substitutes, but that made a four-way televised leaders’ debate impossible.

Instead, TG4 ran four successive in-depth interviews with Enda Kenny, Micheál Martin, Aodhán Ó Ríordáin and Pearse Doherty. While lacking the interaction of a debate, it turned out to be an interesting exercise.

The surprise package was Ó Ríordáin, who had obviously prepped hard. His defence of Labour’s policies on Irish was strong, arguing it was his party that prevented a proposal going ahead to discontinue Irish as a compulsory Leaving Certificate subject.

Martin and Doherty were both strong and aggressive. As is his style, Kenny was more low-key. He was briefed but not overtly so. He had little to say about the 20-year strategy for the Irish language other than an extra €1 million has been allotted to it.

After more than five years, critics say it has achieved little. Mr Kenny argued that job creation in Gaeltacht areas was the key to saving Irish as a native language. It was not convincing.

Still, the very full airing of views from all four party leaderships on Irish-language policies was a very useful exercise that made up for the disappointment of having no debate. Here is my report on it.