Farewell to the town council

Opinion: The main strength of town councils lies in the personal touch 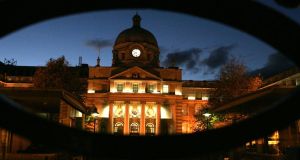 ‘There is little doubt but that the pervading image of the financial fat cat that is membership of Dáil Éireann has contributed to distancing the citizens of Ireland from its elected officials. But the pay scale at town council level truly is the definition of public service.’ Photograph: Cyril Byrne

Passage West Town Council will have its final meeting on May 29th. No placards will protest its loss. No posters of dissent will hang in the shop windows. Almost 95 years of local government will be wiped out quietly from one sunset to the next sunrise, as result of the Local Government Reform Act.

When a rural community is threatened with losing a Garda station or a post office, people voice their upset. Why does the town council, also a public service, not have similar tangible meaning?

One of the town council’s most vital roles is regular liaison with the local area office of the county council on issues such as grasscutting, road and footpath maintenance, signage, area enhancement, weed control – all the simple things that go unnoticed unless they are not done. The town council has an overall vision for the town. So our town council has ensured its aims for the town are recognised in county-level statutory documentation.

And despite its limited budget, it had about €10,000 to spend within the town most years. So when the GAA’s nets blew down in a storm, it helped to re-erect them; and when the seats along the water’s edge finally disintegrated under years of attack by weather and wave, it could replace them.

It is argued in the case of rural post offices that they also perform a social function. Certainly in the case of Passage West Town Council, its social purpose is equally important to that of its limited administrative role.

Many voluntary and community groups struggle for operational funds. Rather than condemn them to the endless cake sales and coffee mornings, the town council often contributes to the basic cost of postage and phone calls. The civic awards scheme honours local achievement bringing recognition to the town.

There is little doubt but that the pervading image of the financial fat cat that is membership of Dáil Éireann has contributed to distancing the citizens of Ireland from its elected officials. But the pay scale at town council level truly is the definition of public service. Those elected to Passage West Town Council are rewarded with a statutory payment of €43 per week after tax, and annual expenses of €1,418. No junkets to Monaco here.

Towns all over Ireland are seeking recognition and identity. If this were not so, why have over 300 rural communities around the country voluntarily established community councils? And why are towns clamouring to be the headquarters for the new municipal districts? There is no homogeneity across either rural or urban Ireland and each town knows that proximity to decision-making increases the chances of its needs being heard.

Personal touch
The main strength of town councils lies in the personal touch. Territorial approaches are recognised the world over in meeting the unique strengths and weaknesses in rural communities. For example, dereliction is an ongoing issue in Passage West town centre. Passage West Town Council is now in its third year of sponsoring a very successful painting scheme that grant-aids up to 75 per cent of the cost of painting on-street facades.

Local governance nurtures local ambition, brings an enhanced sense of pride and ownership and allows targeted, effective use of resources. It brings greater accountability. It is easy within the context of a town to see who turns up for Town Council meetings, which elected member is digging with the Tidy Towns, which trains the local football team, and which collects for a charity outside the gates of the church on a Sunday.

When political leadership is local, party politics tends not to get in the way of good decision-making. Certainly that has largely been the case within Passage West Town Council. The issues are too real, too relevant to the everyday lives of the elected members.

Which is not to say that reform wasn’t necessary. There is an inequality in the way that some towns have the benefit of a town council while other and sometimes bigger towns have none at all. Similarly, the needs of rural areas need to be heard.

Local government reform, as it is being implemented, may well have relevance in Dublin. But there is massive diversity both between urban and rural areas and within rural areas themselves.

So from June 1st, the 5,200 citizens of Passage West will form part of a new electoral area of 72,000 with a 12-fold reduction in representation by a directly elected local government. All in the guise of improved democracy.