Inside Politics: Is there still a chance of a late, late rush to a particular party or group? 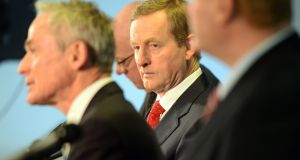 Is there a late surprise left in this general election campaign? Photograph: Eric Luke / The Irish Times

It has been the shortest campaign in history but even three weeks has been too long.

Last week, the parties started to run out of things to stay. There has been a sense of anticlimax.

It’s as if we are waiting for something massive to happen; a big swing or surge, a collapse or a decisive shift.

Could it be that the electorate’s indecision over the last year about who should govern will continue right through to polling day? Or will there be a late late rush to a particular party or group?

The latest Irish Times Ipsos MRBI poll shows there have been shifts since the last poll from February 3rd, right at the beginning of the campaign. But none have been as dramatic or clinching as we had expected.

Contrast this poll with the Irish Times poll taken at a similar juncture in 2007. It was on the basis of that we knew Bertie Ahern was heading for a third term as taoiseach.

Like the campaign, it all seems a little drab and insipid.

Fine Gael was the party with the whip hand and with the best story to tell. It expected to kick on. Everybody else did too. But despite its best laid plans (and boy did it plan) its campaign never caught fire.

Its messages were confusing. On one hand it was saying it would exercise prudence and caution; on the other its proposals on USC were received as a giveaway. And being corrected by Sinn Féin on its sums wasn’t exactly its best moment. It’s at 28 per cent, the same as it was over a fortnight ago.

For Labour too, it’s been just flat. If the 6 per cent showing is repeated on election day, the party is facing a near wipe-out. This is sobering. For Joan Burton, the final leaders’ debate on RTÉ tomorrow night has assumed critical importance.

Fianna Fáil has had a good campaign and will be pleased with its 23 per cent showing. Micheál Martin’s approval ratings have also risen to the highest of all leaders.

Sinn Féin has slipped a little and as Stephen Collins suggests in his analysis, it could have lost some blue collar support to Fianna Fáíl.

Gerry Adams did not have a great week last week. He struggled with detail on Sean O’Rourke and on Six-One and this might be reflected in the findings.

The other finding that just can’t be ignored is the independents and others at 28 per cent.

At this stage we can take it that a substantial proportion of the electorate will vote for none of the above. Unless there is a grand coalition between the two biggest parties, that unaligned cohort will have to come into the reckoning for government formation.

Fianna Fail and Fine Gael can only muster a little over 50 per cent of the vote between them these days. The hegemony of the big parties is well and truly finished.

A real debate for once

Last night was the least heralded of the live debates on RTE but it turned out to be a peach.

It took place in the Facebook offices and was transmitted on RTE2. So it was one that was held with youth very firmly in mind. There were even updates on social media activity. That said, there was no broadcasting of any specific messages. After the experience of 2011, RTE was never going to go there.

It was a second-tier debate although it included some big political guns. The guests were Leo Varadkar, Mary Lou McDonald, Aodhan O Ríordáin, Eamon Ryan, Averil Power, Adrienne Wallace (of PBP) and Timmy Dooley. Instead of having a separate panel alongside each other on stage, the seven guests were dotted amongst the audience.

Perhaps there was too much effort by RTE and the guests to be down with the kids. The males dispensed with the ties and the camera work was shaken and incessantly shifting, what you associate with Nordic Noir.

The audience included people who had an interest in the topics that were chosen. The first question about mental health set the tone for a sober and expansive debate, where politicians listened to each other with respect. There were no squabbles and no interruptions. There were some differences of opinion (on abortion and corporation tax) but because they allowed space, we actually knew what those differences were.

The other factor was the excellent presenter Keelin Shanley, who handled it all so adroitly.