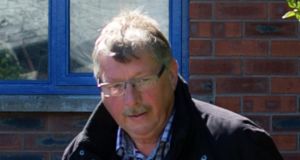 Sammy Wilson who won East Antrim for the DUP with a healthy majority. Photograph: New

Sammy Wilson has retained the East Antrim seat for the DUP.

The firm favourite was re-elected with a healthy majority but the party vote was down on 2010, something Wilson blamed on Ukip standing in the constituency and his party being excluded from national leaders’ debates.

“I am very happy the result has turned out the way it has, though many would say it was fairly predictable it was going to happen,” he said.

“More importantly is we are going back with a strong DUP team which will hopefully give us a huge degree of influence to enable us to achieve the objectives we have set for improving Northern Ireland. ”

He added: “Yes, our vote was down. Obviously Ukip took votes from us which emphasises the importance of what we said [which was] that if we were excluded from national debates we were giving opponents a free run.”

On the issue of double-jobbing as a Westminster MP and a Stormont MLA Wilson told Irish Times he will make a decision on it next year when the Assembly elections come around.

“I have got the year to make that decision. The main thing is if we’ve got influence at Westminster that is where I will be wanting to make my mark.”

The economic elements in the DUP’s Northern Ireland Plan will be an area of focus for the former finance minister at Westminster.

“We want economic growth, being less dependent on the public sector, grow the private sector. There are a whole range of things, including the cost of corporation tax, the promotion of foreign direct investment, opportunities for Northern Ireland firms, public procurement in the mainland and infrastructure projects we believe are essential to give us economic growth here.

“Things the government has already announced for the north east of England and we are saying that kind of package we want to negotiate for Northern Ireland.”

The Ukip leader in Northern Ireland David McNarry said he was pleased with the party’s performance in East Antrim and elsewhere.

“It stands us well for next year, which is what it’s all about for us,” he said.