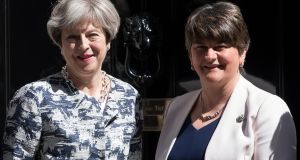 Sinn Féin president Gerry Adams said the Democratic Unionist Party commitment to support any deal on the UK exiting the European Union was a “blank cheque for a Tory Brexit which threatens the Good Friday Agreement”.

Mr Adams was speaking following the £1 billion agreement between the Conservatives and DUP to prop up Theresa May’s government for the next two years.

Mr Adams said that the “allocation of additional funds could help to ease the enormous pressure on our public services” but that the “devil is in the detail”.

In what appeared to be a holding response to the deal, Mr Adams said “if, as they claim in today’s agreement, both the Tories and the DUP will adhere fully to the Good Friday agreement and its successors they need to deliver on this for the political institutions can be restored”.

In a reference to the Stormont talks and the efforts to resolve issues such as the Irish language, same sex marriage and the past Mr Adams said that “outstanding issues must be agreed if institutions are to be restored.

“So there is work to be done by the DUP and only limited time to do this. As they return to Ireland to meet with Sinn Féin and the other parties, the DUP should be minded of the words of Edward Carson speaking in 1921 on the Tory intrigues that had led him on a course that would partition Ireland: ‘What a fool I was. I was only a puppet, and so was Ulster, and so was Ireland, in that political game that was to get the Conservative party into power’”.

Minister for Foreign Affairs and Trade Simon Coveney said an “enhanced Northern Ireland voice” could be beneficial in relation to the ultimate Brexit deal.

Agreement between DUP and the Conservatives

“I note that the agreement provides for DUP support for British government legislation on Brexit. An enhanced Northern Ireland voice articulating an agreed devolved government position could see more effective and inclusive representation of the unique circumstances of Northern Ireland at Westminster,” he said.

Mr Coveney, who is at Stormont for the talks to restore devolution, said he welcomed both parities “recommitment to the Good Friday Agreement and its successors, and the commitment by the British government to govern in the interests of all parts of the community in Northern Ireland.”

In Scotland and Wales the £1 billion agreement between the Conservatives and the DUP has led to immediate demands for similar boosts to funding for other parts of the UK.

Welsh first minister Carwyn Jones said the cash injection amounted to a “bung” which flew in the face of the British government’s commitments to fair funding for the nations and regions.

Mr Jones said: “Today’s deal represents a straight bung to keep a weak prime minister and a faltering government in office. Only last week, we were told that the priority was to ‘build a more united country, strengthening the social, economic and cultural bonds between England, Northern Ireland, Scotland and Wales’. This deal flies in the face of that commitment and further weakens the UK, and as currently drafted all but kills the idea of fair funding for the nations and regions.

Mr Jones said it was “ outrageous” that Ms May “believes she can secure her own political future by throwing money at Northern Ireland whilst completely ignoring the rest of the UK.”

Scotland’s first minister Nicola Sturgeon tweeted: “Any sense of fairness sacrificed on the altar of grubby DUP deal to let PM cling to power, and Scots Tories influence in No 10 shown to be zero.”

Scottish Labour leader Kezia Dugdale said: “This deal with the DUP has taken more than two weeks to stitch up, proving just how little authority Theresa May has left.

“If the price of propping up this miserable Tory government is hundreds of millions of pounds for Northern Ireland, it is vital that all nations and regions of the UK also get extra funding to end austerity.

“If Scottish Tory leader Ruth Davidson has any influence in Downing Street at all, she will be demanding extra cash to reverse the spending cuts her government has inflicted on Scotland — aided and abetted by the SNP, which has simply turned Holyrood into a conveyor belt for Tory cuts.

Shadow Northern Ireland secretary Owen Smith said: “Labour argued at the election just a few weeks ago that public services require extra funding across the UK, so I welcome the announcement today that additional funding has now been found for Northern Ireland.

“However, the deal between the Tories and the DUP throws up all manner of questions, not least whether more money can now also be found for schools, hospitals, social care and emergency services in desperate need of cash in England, Scotland and Wales.