Lar Bradshaw was a non-executive director of Anglo Irish Bank 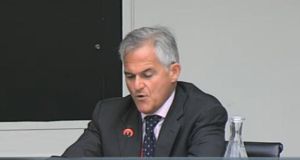 Lar Bradshaw, former chairman of the Dublin Docklands Development Authority who was also a non-executive director of Anglo Irish Bank, appears this afternoon before a Dáil Public Accounts Committee. 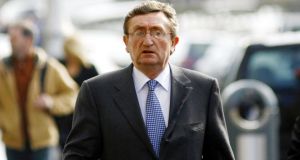 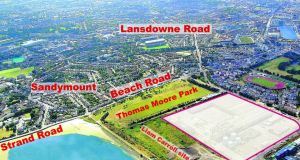 The former chairman of the Dublin Docklands Development Authority, Lar Bradshaw, has told a Dáil Public Accounts Committee, he did not have a conflict of interest in the purchase of the Ringsend Glass Bottle site.

Mr Bradshaw was a non-executive director of Anglo Irish Bank, which was involved in funding the €431 million joint venture between the authority and developer Bernard McNamara in 2007.

He told the committee that he was “a little surprised” when he learned the bank was backing the venture as he “did not expect it would be within the mandate of Anglo” at the time.

The committee chaired by Fianna Fáil TD John McGuinness is investigating the purchase of the site following a 2012 report by the Comptroller and Auditor General that found the authority’s outlay in relation to the deal was €51 million but the site value had reduced to €45 million.

Mr Bradshaw and former Anglo chairman Seán Fitzpatrick, who was also a board member of the authority, had both been invited to answer questions in relation to their involvement in the deal. Mr Fitzpatrick has declined to attend the committee.

Mr Bradshaw said he had understood that Mr McNamara, who was securing the funding for the project, was getting a loan from Ulster Bank/Royal Bank of Scotland. However at a meeting in October 2006 Mr McNamara said he was “switching horses” to Anglo and Bank of Ireland. A third authority board member Declan McCourt was a non-executive director of Bank of Ireland.

The following morning an authority board meeting to discuss the purchase was held by conference call. The members with involvement in the banks declared their interests but the board decided they should not absent themselves from the meeting.

Contrary to popular belief, he said, the State did not loose money as a result of the authority’s purchase of the glass bottle site, but in fact made money. The State-owned Dublin Port Company got 33 per cent of the proceeds of the sale or just over €138 million. “This means that the State netted just over €85 million net profit from this transaction.”

He said he has watched in “abject horror” in recent years as the episode had become characterised as a “debacle” and has been shocked that his integrity has been called into question. However he said his greatest regret was that two primary schools which were to have been built through expected profits of the deal did not go ahead.