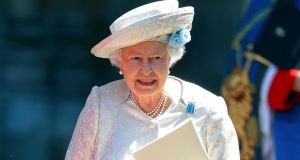 Mr Higgins will be honoured at a state banquet hosted by Queen Elizabeth at Windsor Castle. Photograph:L Andrew Winning/Reuters

Áras an Uachtaráin has released details of the upcoming state visit by President Michael D Higgins to Britain.

The visit follows the successful visit of Queen Elizabeth to Ireland in 2011.

The official delegation will depart Dublin on the afternoon of Monday the 7th April and will return on the evening of Friday 11th April.

The four-day visit will be the first state visit by an Irish head of state to Britain. President Higgins will be accompanied by his wife Sabina Higgins and by Tánaiste Eamon Gilmore.

During the course of the State visit the President and his wife will be guests of Queen Elizabeth at Windsor Castle.

President Higgins and Mrs Higgins will be met at Heathrow airport by the Ambassador of Ireland, Mr Dan Mulhall and the Viscount Hood, Lord-in-Waiting to the queen.

President Higgins will be met by the Prince of Wales and the Duchess of Cornwall at the Irish Embassy in London, after which they will depart together for Windsor.

Queen Elizabeth and her husband, the Duke of Edinburgh, will formally greet Mr Higgins and his wife at the Royal Dais, Datchet Road, Windsor after which they will travel together by horse-drawn carriage for a ceremonial welcome at Windsor Castle.

In the Quadrangle at Windsor Castle, President Higgins, accompanied by the Duke of Edinburgh, will inspect a guard of honour. As part of the formal welcome, the guard of honour will give the royal salute, and the band will play the Irish and British national anthems.

Following a private lunch hosted by the queen at Windsor Castle, she will invite Mr Higgins and his wife to view Irish related items from the royal collection.

Afterwards they will depart for London and visit Westminster Abbey, where they will be received by Dr John Hall, the Dean of Westminster. Prior to commencing a tour of the Abbey, President Higgins will lay a wreath at the Grave of the Unknown Warrior.

Later in the afternoon, Mr Higgins will visit the Palace of Westminster, where he will be met by Speaker of the House of Commons John Bercow and Lord Speaker, the Baroness D’Souza.

President Higgins will then deliver an address to both Houses and afterwards will attend a reception with members of the all-party parliamentary groups.

That evening, Mr Higgins will receive a courtesy call from the leader of the opposition Ed Miliband at Windsor Castle.

Later in the evening, President Higgins and his wife will be guests of honour at a state banquet hosted by the queen at Windsor Castle. The queen and the President will both make a short address at this banquet.

On Wednesday morning, President Higgins and his wife will be escorted by Prince Andrew, the Duke of York, to the grand stairs in Windsor Castle to view the colours of disbanded Irish regiments. These colours have been at the castle since 1922.

Mr Higgins will then visit University College London Hospital on Euston Road where he will be greeted by the Earl Howe, parliamentary under-secretary, UK Department of Health. They will then meet patients and some Irish staff members, past and present, of the National Health Service.

Later in the morning, they will visit the Royal Society where Mr Higgins will view an exhibition of items related to Ireland and make an address on the importance of scientific and technological cooperation between Ireland and Britain.

President Higgins will then travel to 10 Downing Street for a meeting at a lunch hosted by Prime Minister David Cameron.

While Mr Higgins is visiting the Royal Society and Downing Street, Sabina Higgins will undertake a separate programme which comprises a visit to the Royal Academy of Dramatic Art (Rada) and she will attend a lunch at the Irish Embassy focusing on the theme of Irish fashion and design.

In the afternoon, President Higgins and Sabina will attend a Youth Workshop at City Hall, titled “Taking Charge of Change Together”. It will involve young people from Ireland and the UK who participate in Gaisce - The President’s Award/The Duke of Edinburgh’s Awards; the President’s ‘Being Young and Irish’ initiative; the British Youth Council; and Irish community groups in Britain. Mr Higgins will be greeted on arrival at City Hall by the Mayor of London, Boris Johnson. After being briefed by representatives of the young people on the content of their workshop, President Higgins will make an address.

Later in the evening Mr Higgins will receive a courtesy call by deputy Prime Minister, Nick Clegg, at Buckingham Palace.

Afterwards the President and Sabina will attend a Banquet hosted by the Lord Mayor of the City of London, Alderman Fiona Woolf, and the City of London Corporation at the Guildhall. The queen will be represented at the Banquet by the HRH the Duke and Duchess of Gloucester. After dinner, the President will address the 700 invited guests.

On Thursday morning, the President and Sabina depart Windsor Castle for a visit to the Food Animal Initiative (FAI) Farms, Oxford. They will be met by a party which includes Mr Aidan Cotter, Chief Executive, Bord Bia (Irish Food Board). They will be briefed on the farm’s sustainability initiatives and the Bord Bia ‘Origin Green Programme’, which will also be profiled at this event.

The President and Sabina will then visit Park House Stables, Kingsclere where they will be received by Mr Andrew and Mrs Anna-Lisa Balding. They will meet with trainers, jockeys and other staff at the stables and will also visit the tack room, the yard and the training areas.

In the early evening, Mr Higgins and Sabina will attend a Northern Ireland themed reception hosted by the queen at Windsor Castle.

Later on Thursday evening, the President and Sabina will attend Ceiliúradh at the Royal Albert Hall. The Prince and Princess Michael of Kent will represent the queen at this celebration of music, song, dance and poetry.

On Friday morning, President Higgins and Sabina will bid farewell to the queen and the Duke of Edinburgh at Windsor Castle. Later that morning they will visit the Royal Shakespeare Company, Stratford-upon-Avon. Following a tour of the building, they will watch a short performance, Mr Higgins will make a brief address and meet the actors and other members of the creative team. They will then visit Shakespeare’s birthplace.

That afternoon, President Higgins will visit Coventry Cathedral and take a tour of the ruins of the old Cathedral, which was destroyed in World War II.

He will also meet with Denominational Representatives in the Chapel of Unity and will then move to the nearby St Mary’s Guildhall, where they will be greeted by Lord Mayor of Coventry Cllr Gary Crookes, and other local representatives. This final event of the state visit will be a reception for members of the Irish community at the Guildhall, and will also include an address by Mr Higgins.

Later that afternoon, after a final farewell by the Lord Chamberlain on behalf of the queen, President Higgins and his wife depart from Coventry for Dublin. On return to Baldonnel, military honours will be rendered.