Up to 4,000 employers have used JobsPlus system to recruit long-term unemployed 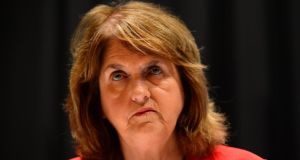 More than 14,000 people have had their welfare benefits cut by up to €44 for refusing to take up job or training offers.

New figures released by the Department of Social Protection show the extent to which the measure has been used since its introduction in early 2011.

The statistics show 359 people had their jobseeker’s payment reduced that year while that grew to 3,681 in the first seven months of this year.

A spokeswoman for Minister for Social Protection Joan Burton said the measure was used when a customer refused or failed to engage with activation measures.

Last year saw the highest number of welfare benefits reduced when 5,325 payments were cut by the department.

Figures from the Central Statistics Office for the month of June showed 208,100 people were on the live register.

The penalty rates for welfare payments differ depending on the size of the allowance. The top rate of jobseeker’s benefit can be cut from €188 to €144 – a reduction of €44. Smaller penalties are applied in the case of smaller payments.

The reduced payment rate was introduced as a last resort following a period of “non-engagement” by a welfare recipient in an employment action plan or for refusing an “appropriate” offer of training by the Department of Social Protection or Fás.

The department also has the option of suspending a payment.

A spokeswoman said customers who refused an offer of suitable employment may be disqualified for a period of up to nine weeks.

The scheme, which has been operational since July 2013, provides a monthly financial incentive to employers who recruit those who are long term on the live register.

Those who are part of the scheme can avail of €7,500 over two years where a jobseeker who is 12-24 months on the live register is recruited; the figure is €10,000 for each person recruited who has been unemployed for more than 24 months.

In order to qualify, an employer must be approved by the department and offer full-time employment of at least 30 hours spanning at least four days per week to eligible recruits.

A spokeswoman said: “An initial target was set at 2,500 jobseekers. This was subsequently increased in June 2014 to 3,000 and to 6,000, as part of the initiatives supporting jobseekers in Budget 2015.

“At the end of June 2015, 3,797 employers were in receipt of a payment in respect of 5,179 employees under the JobsPlus incentive.

“Over 60 per cent of those supported under JobsPlus were more than 24 months on the live register.”