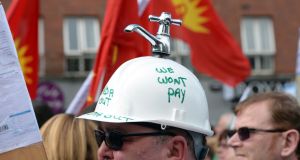 The expert commission which looked at the issue of water funding was not conducting its work in laboratory conditions. Comprised as it was of professionals in this area, all were aware of the political realities of water charges in Ireland.

No other issue proved to be so incendiary over the past three years. No other issue has divided parties and the population to such an extent. It was always unlikely the commission would opt for a nuclear option. It seems the members collectively channelled their inner Sir Humphrey when arriving at their ‘realpolitik’ recommendations.

Technically, domestic water charges have not been abolished. They will still apply but the threshold seems to have been put incredibly high. The value of usage should cover “all normal domestic and personal usage”.

That value is to be determined by the Energy Regulator as well as the Public Water Forum. The commission outlines a number of methods to arrive at this. One involves a close analysis of consumption on personal washing, toilet flushing, drinking, cooking, clothes washing, dishwashing, waste disposal and house cleaning. Another would be to place the limit at the actual consumption of 90 per cent of households, or at 150 per cent of average consumption.

It is clear all those methods involve a significant increase in the actual domestic consumption. The commission is careful to point out that these are not allowances that are part of a charge. This water usage will be paid for out of general taxation. It is only when households exceed this limit that individual charges will kick in.

The other main recommendations seem to find a balance between competing claims and requirements. For one, it plumps for a national utility to be retained but in public ownership. It also says that provision should be made for those with “special medical or other needs”. That will also necessitate a convoluted debate when it comes to defining what those needs are.

The conservation imperative is persuasive and educational, rather than coercive or sanctions-based. There is a reference to those who have already paid water charges (more than half of households) being “treated no less favourably than those who have not”. This language mirrors the language of the confidence and supply agreement between Fine Gael and Fianna Fáil. There will be a mutiny from the compliant if they do not get a refund, as the message would then go out that societal defiance has been rewarded.

Finally, it seems there is not a full degree of certainty as to whether or not this solution would meet the requirements of the EU water framework directive and with the polluter pays principle. The EU Environment Commissioner Karmenu Vella has pointed out that Ireland does not have a derogation from domestic water charges. It does not seem likely that this arrangement will satisfy the European Commission, but the European Court of Justice is the final arbiter.

So where does it leave the water charges question politically. Independent Senator Pádraig Ó Céidigh and his committee of 20 parliamentarians now take over the process. They will have until March next year to report back to the Oireachtas and make recommendations arising from their examination of the report.

Even before the committee has been formed, the Anti-Austerity Alliance-People Before Profit have objected to his appointment. That gives a foretaste of what should be a rancourous and divided debate over this question. The AAA-PBP are opposed to all water charges and will see this formula as a back-door for charges. On Tuesday, the Cork North-Central TD Mick Barry said such a process had happened with bin charges.

Sinn Féin, which hardened its line on water charges in then run-up to the general election, is also likely to have difficulties on this matter.

Labour will support the recommendations as will Fine Gael. The critical party will be Fianna Fáil. It called for this arrangement so it would have to be brass of neck to stare down the report of a commission it requested. At the same time, some of its TDs, notably Thomas Byrne, said that water charges were all but finished. The party will be called out on its conflicting statements, mostly by Sinn Féin.

That will cause it much political embarrassment. But it will have to grin and bear it , otherwise it will be shorn of all political credibility on this issue.