Party profile: Labour can no longer rely on an anti-establishment vote 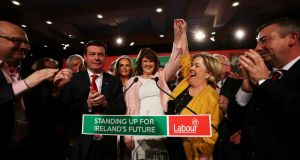 In many ways, how Labour performs will be a central question of this election. Fine Gael looks set to post a good performance that will see it as the senior party in a future Coalition.

The issue is whether Labour can hold up its side of the bargain to see the current Coalition returned to office, with or without the support of Independent deputies.

Party figures such as Brendan Howlin have already acknowledged the obvious: that a repeat of its 2011 showing, when it took 37 seats with 19 per cent of the vote, is not going to happen.

It is all about damage limitation this time, and something of a Dunkirk strategy where the party hopes an honourable escape will be a victory.

TDs have already said anything less than 15 seats could see Labour going to the Opposition benches .

How the party came to this pass has already been well chronicled. Labour’s pre-election promises in 2011 are often cited.

They were most memorably encapsulated in that famous “Tesco ad”. The ad, which was designed like one for the supermarket chain, and which boasted the tagline “Every Little Hurts”, laid out a number of cuts and taxes Labour claimed would be implemented by Fine Gael , including water charges, child benefit reductions, a €1 rise in excise on a bottle of wine and a rise in car tax.

All of the measures were implemented by the Fine Gael-Labour government formed after that election.

It could be argued Labour’s trouble was sewn even before the 2011 election campaign when Eamon Gilmore cast himself as the voice of the people in the Dáil chamber, castigating Brian Cowen from the Opposition benches and showing Enda Kenny up in the process.

Gilmore never adjusted his behaviour even as it became clear that government and tough decisions lay ahead.

A big proportion of the anti-establishment vote that backed Labour in 2011 left the party relatively quickly into the Coalition’s tenure, and their support dropped to 10 per cent in May 2012.

Despite some occasional increases, Labour has hovered below 10 per cent support for three years. The party has been the obvious target for attacks from Sinn Féin and left-wing Opposition deputies because of water charges, the property tax and cuts to some welfare payments, such as child benefit.

Yet the party had some notable achievements in government. It did many things that Syriza promised in Greece but could not deliver, such as protecting and increasing the minimum wage, maintaining core welfare rates such as the dole and preventing redundancies in the public sector.

Fine Gael would not have passed the Protection of Life During Pregnancy Bill or held the same-sex marriage referendum if Labour was not at the Cabinet table.

But the ghost of the 2010-2011 period hangs over the party as campaign 2016 begins. It will not be as transfer-friendly as it was in the last election.

The party will hope it can bank on stalwarts such as Brendan Howlin and Willie Penrose hanging on in Wexford and Longford-Westmeath respectively.