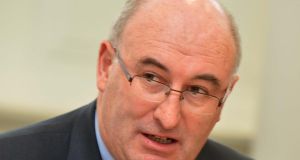 Former minister for the environment Phil Hogan said in 2013 that the Government “commits to holding a referendum before the end of 2015 on a proposal to amend the Constitution to provide for a voting age of 16”. Photograph: David Sleator/The Irish Times

The Government has abandoned plans to hold a referendum to reduce the voting age from 18 to 16 as recommended by the constitutional convention.

Taoiseach Enda Kenny confirmed in the Dáil yesterday that two referendums will be held in May but the proposal to reduce the voting age will not be one of them.

The referendums planned for May will feature proposals to amend the Constitution to allow for same-sex marriage and to reduce the age at which people can stand for the office of president from 35 to 21.

Despite a commitment in July 2013 that a referendum to reduce the voting age from 18 to 16 would be held this year, the Coalition has decided not to proceed with it in the Government’s lifetime.

“The Government therefore commits to holding a referendum before the end of 2015 on a proposal to amend the Constitution to provide for a voting age of 16,” he said. “The Government will proceed now with preparations for bringing forward the relevant legislation. This will include careful examination of the consequences of such a change across the policy spectrum including for the age of majority.”

in the event of the people deciding by referendum to reduce the voting age, legislative change would be necessary to provide for persons aged 16 to register to vote and the necessary administrative arrangements for this would also need to be made.

It is now almost 34 years since the voting age was reduced from 21 to 18 years. Arguments in favour of further reducing the voting age put forward at the convention included that it could help increase electoral turnout and that the voting age would be consistent with other legal rights 17-year-olds have.

However, there has been considerable opposition by senior figures in both Government parties to the proposed reduction in the voting age, particularly in light of the already low turnout at elections of the 18-24 age bracket.