Cheesemonger and lollipopman among election hopefuls 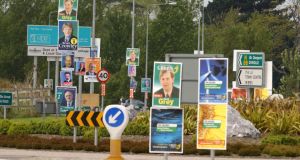 About 28 per cent of those going forward for county or city council seats later this month for listed as non-party.

They come from the left, right and centre. Some are company directors. Many more are farmers. And a good number of this cohort of just over 2,000 people find themselves out of work.

A cheesemonger, a lollipopman, an explosives supervisor and a self-proclaimed “man of leisure” are also in the group, members of which are linked by a common desire to win a seat on a county or city council later this month.

There’s no such thing as a typical local election candidate but the passing of the deadline for nominations offers an opportunity to examine common trends among those contesting 949 seats on 31 councils on May 23rd.

Information provided by election returning officers across the State shows independent candidates will be most prevalent on ballot papers, with some 28 per cent of those going forward listed as non-party.

Some 468 – or about 23 per cent – of the field comes from the Fine Gael ranks, followed by Fianna Fáil, which a party spokesman said was not counting Blackrock rebel Mary Hanafin among its 413 official candidates.

The figures show you’ll be more likely to find a Sinn Féin than a Labour candidate in your area, and that a number of left-leaning parties are attempting to gain a foothold, with the People Before Profit, Anti-Austerity and United Left alliances fielding almost 90 hopefuls between them.

Adrian Kavanagh, a NUI Maynooth geography lecturer who has been keeping a count of local election candidates, said a broader selection of Sinn Féin, independent and left-wing candidates had seen the numbers swell past the 1,883 that contested in 2009 and over the 2,000 mark. “This is a trend we also saw in the last general election,” he said. “It could be a political reaction to a sense that the parties are falling out of favour and that there may be an opportunity.”

Mr Kavanagh also noted the increase in city and county council seats and the elimination of town and borough councils as potential reasons for the increase.

In most cases, the local election candidate lists provide a brief description of the person’s profession.

In gender terms, your candidate is still far more likely to be male, despite the fact parties risk losing a portion of their State funding if they fail to meet a 30 per cent threshold of female or male candidates in the next general election.

Fianna Fáil said about 18 per cent of its local election candidates were female; Fine Gael said it was 23 per cent; while Labour and Sinn Féin are in and around the 30 per cent mark.

When those not stating an occupation are excluded, public representative/ councillor is, unsurprisingly, the most-cited job, applying to almost 20 per cent of those running. About 6 per cent said they were farmers, with the majority of these coming from the Fine Gael, Fianna Fáil and independent ranks.

Over 50 candidates (3.2 per cent) are listed as unemployed, with about the same number saying they have retired. More than 60 said they were “self-employed”.

Publicans account for more than 1 per cent of the field, with sales representatives, accountants, solicitors, administrators and teachers also showing a keen interest in getting into local politics.

One candidate, Denis O’Riordan, an Independent running in Limerick North City, stated his profession as “man of leisure”.

Arguably, the most ambitious candidate out there is Independent Charlie Keddy in Wicklow, who is contesting all five local election areas.

Former TD is not listed by many city and county council candidates as a profession but there are some former Dáil dwellers on the list, among them Seán Haughey, Charlie O’Connor, Mary Hanafin and Margaret Conlon (Fianna Fáil); Chris Andrews (now with Sinn Féin) and Ciarán Cuffe and Dan Boyle of the Green Party.