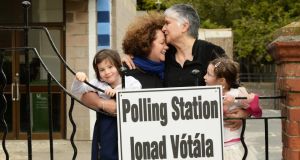 Campaigners for same-sex marriage believe the referendum will be carried on the back of high turnouts in urban centres and massive engagement by younger voters.

Minister for Agriculture Simon Coveney, Fine Gael’s director of elections, told The Irish Times he was hopeful the proposition would be carried when votes were counted on Saturday.

Mr Coveney also said there was a sense as people voted of Ireland “letting something negative go, leaving a prejudice we know is there as part of our history behind us”.

“It is about how we value and treat the gay community in Ireland. So many human stories and so many families are caught up in this and are waiting with bated breath for the result.”

Just before polls closed, the average turnout across Dublin county was an estimated 65 per cent and 53 per cent in the Dublin city council area. Turnout in Cork city was above 60 per cent.

However, in other areas of the State, initial turnout was in line with recent referendums, or only slightly up.

Minister for Communications Alex White, the director of elections for the Labour Party, said he had been monitoring his Dublin South constituency.

“It seems likely that turnout will finish as high, if not higher than in the general election. I think something very big happened in Ireland. A whole new generation has been politicised.”

Those on the No side also acknowledged that the large turnout in Dublin, in particular, was likely to tip the balance in favour of a Yes.

Tipperary Independent deputy Mattie McGrath, one of only two TDs who publicly called for a No vote, said it looked likely that the high turnout in Dublin would carry the proposal.

Senator Rónán Mullen, also on the No side, said committed No voters had turned out, as well as those strongly for a Yes, and said many in urban areas were not in favour of same-sex marriage.

Minister for Health Leo Varadkar said he was “quietly confident but almost afraid to believe it in case it goes the wrong way”. He added: “Turnout was good and younger voters turned out in big numbers.”

Final turnout will not be known until all votes are counted for the same-sex marriage referendum, as well as the referendum to cut the age eligibility for presidential candidates.

The turnout for the last general election in 2011 was 70 per cent, with 52 per cent of eligible voters casting their ballots in last year’s local elections.

The referendums on the proposed abolition of the Seanad and the establishment of a court of appeal, which took place in October 2013, had a turnout of 39 per cent.

The turnout for the children’s referendum in November 2012 was 33 per cent, while 51 per cent voted in the fiscal treaty referendum in May 2012.

The referendum to approve the 1937 constitution had a 76 per cent turnout, while 71 per cent turned out for the 1971 vote on joining the then European Economic Community.