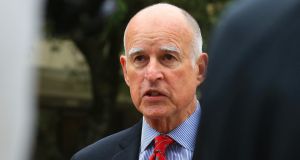 California governor Jerry Brown said Ireland had attracted so much of the business of computer, phone and tablet maker Apple, which is based in the West Coast state, with “creative accounting.”

Speaking at an Enterprise Ireland company-pitching event attended by Taoiseach Enda Kenny in San Francisco, the governor questioned in a light-hearted speech how Apple had come to establish so much of the company’s operations in Ireland.

“I don’t know how you got to have Apple to have so much of their business in Ireland. We thought they were a California company but when you look at their tax return, they are really an Irish company,” he said, to laughter from the audience at the event in San Francisco.

“Anyway that is part of the creativity - yeah, it is called creative accounting. Anyway, I won’t go there,” said the politician who is running for a fourth term as governor this year.

California-based Apple came under fire at a US senate hearing last year for using Irish companies that were “stateless” for tax purposes by exploiting the difference in tax residency rules under the Irish and US tax systems to slash billions of US dollars off $74 billion in worldwide income over three years.

Mr Brown, referring to Mr Kenny’s earlier comments about praise for Ireland from Forbes magazine as the best place in the world for business, joked that if California could have Ireland’s tax rate, the state could very well become “an independent country”.

Praising Ireland’s innovation, the governor, whose forebearers hail from Co Tipperary, said Ireland and California could strengthen ties because their people have the “same spirit of insouciance and insolence and creativity and ‘get out of our way because we are taking over.’”

Speaking before Mr Brown at the final public event of a three-day visit to the San Francisco Bay area, the Taoiseach drew parallels between Ireland and California, and said that Ireland was “becoming a magnetic attraction for young people from all over the world”.

“You are in the greatest innovation hub in the world and we tend to replicate that in our country in Dublin,” he said.

Aneel Bhusri, founder and chief executive of Workday, said that the company would like to hire more staff in Dublin beyond the 200 roles.

“If we could hire more than 200, we will if we can find them,” he told reporters, adding that the company wanted to recruit computer scientists and engineers “either right out of college or with a few years of experience”.

“Talented hackers,” replied David Clarke, vice president of technology development when asked what kind of people the company was looking for in Ireland. “That is a real skill.”

Speaking earlier next to the Taoiseach, Jeremy Stoppelman, co-founder and chief executive of Yelp, also said his company would eventually grow its Irish workforce beyond the 100 new positions.

“One hundred jobs is just the beginning,” he said.

Mr Stoppelman said that he was attracted to Ireland following his time working with online payments company Paypal in Dublin and that the attraction of Ireland has grown with the cluster effect of more and more companies in California setting up Irish operations.

“That was sort of the beginning of this influx of Silicon Valley talent and companies coming to Ireland. I already had it at the back of my mind that it was a good place,” he said.

“Over the years it has just grown tremendously. It is now the new heart of Silicon Valley for Europe. ”

Mr Stoppelman said that an investment by Elevation Partners, the US private equity company in which Bono of U2 is an investor, helped the company avoid being taken over and to remain independent.

“Bono’s firm Elevation stepped in a provided the financing that allowed us to continue to grow and to invest in Ireland,” he said.

Another company the Taoiseach visited yesterday, New Relic, a software analytics company, said that it had committed to add 50 new jobs to its Irish workforce of 30 by the end of this year but that it would expect to create more jobs than that in that timeframe.

Speaking to reporters after his meetings with the companies, Mr Kenny, who flies back to Dublin today, described the proposed expansion of Yelp and Workday as votes of confidence in Ireland.