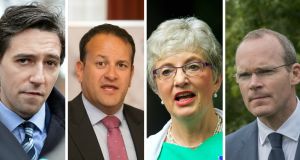 The Department of Health has put an end to many a political ambition.

How many new ministers have started full of ideas, ambition and reform, and have been stretchered off, desperately staunching the damage?

Who has emerged from there stronger than when they went in? Michael Noonan? Brian Cowen? Micheál Martin? Mary Harney? James Reilly? Even Leo Varadkar?

Step forward Simon Harris. At 29 he is the youngest Minister for Health in the history of the State.

Yet there is no evidence of youthful callowness here. Harris has been a star performer for Fine Gael since 2014. He is hard working, street smart, always well-briefed, practical and has a bucket-load of ideas. And he is brimful with confidence too.

It is hard to keep up with his energetic start. He scored an extra €500 million for a winter initiative, and this week published a “five-point” plan, with a €50 million lure, to reduce record waiting lists. He has reactivated the National Treatment Purchase Fund, and has been active on the legislation front.

He waffled a bit this week when Cathal Mac Coille pressed him on public hospital resources, resorting to political vagueness and inexactitude.

A good start. But too many of his predecessors have stumbled after a promising start. The real test will inevitably come next year when we will see if he has made meaningful inroads.

If “trucking away” does not offend the ears of the mandarins in Iveagh House, that’s what Flanagan has been doing. And we don’t mean it in a pejorative sense.

His year has been dominated by Brexit, both before and after the June referendum.

Once it became clear the referendum could be lost, he threw himself into the campaign, speaking to as many Irish groups in Britain as he could.

Since the defeat he has been equally busy. Last week he completed his last of 27 one-on-one session with foreign ministers, arguing Ireland’s unique position.

Its concerns: the Border, trade between Britain and ourselves and the Common Travel Area.

There was some criticism of the lack of a contingency plan. But, in fairness, some scenarios had been set out by the ESRI and others, and it is hard to set out a full plan or strategy ahead of negotiations starting.

Her appointment was the biggest surprise of Kenny’s Fine Gael picks. Not only did she leap-frog from the backbenches, she was handed the plum job of Jobs and Enterprise. Some of her colleagues scratched their heads as to why she had gained preferment over others. She has been careful since being appointed, and has fulfilled all the duties if not really laying out her views on on the way forward for enterprise and jobs policies. As such she has inherited Richard Bruton’s annual “Action Plan for Jobs”. She has done little yet to show divergence from her predecessor. The judgment on that will have to be made in time.

Frances Fitzgerald should be mentioned more as a possible successor to Kenny. She is the Tánaiste, and in a powerful position in Government, close to Kenny and in charge of a key ministry.

As Minister for Justice she is everything that Alan Shatter was not. After his very dramatic tenure, she provided a safe pair of hands.

The down side is that she does not have his reforming zeal and it is unlikely we will see far-reaching initiatives during her time in Justice.

Fitzgerald made her name as an equality campaigner, but most of her record in Justice has been as a traditional Fine Gael law-and-order minister.

In the first week she had to weather a controversy as to whether Garda Commissioner Nóirín O’Sullivan’s instructions during the O’Higgins’ commission were to challenge the integrity of whistleblower Maurice McCabe. Her response was not wholly convincing.

Her tenure has been party governed by “events”, notably the appalling violence of the feud between the Kinahan and Hutch gangs.

Tougher bail legislation, an electronic tagging Bill and a new armed support unit for Dublin have all featured.

She has shown signs she will be more amenable to a more open approach to asylum seekers in the State, including recently supporting their right to cook in their accommodation. Solid, safe if not spectacular.

An Independent TD, she said part of the reason she entered Government was to ensure women’s rights and inequalities were tackled.

She also specifically said her presence would ensure the requisite ambition to pursue a referendum on the Eighth Amendment.

Moving into Government with a party you opposed for four years is a tough proposition and involves compromise and also invites claims of betrayal.

Zappone was nominated to the Seanad by Labour yet opposed many of the government’s measures. Even the act of joining Government would have alienated some supporters.

She did not help her cause by tweeting in the morning she was abstaining in the vote for Kenny as Taoiseach, and then voting for him in the afternoon.

Mick Wallace’s Private Member’s motion on the Eighth Amendment presented her with a quandary. How she fared depends on what side of the fence you were.

Shane Ross and John Halligan defied collective Cabinet responsibility to support the motion. She would not go there.

In one sense it was brave because she knew she would get flak for it.

Her comment that a referendum would not succeed at this moment infuriated some campaigners.

An academic, she will be a good technocratic Minister. She has established a forum on childcare, and launched a pilot programme in Dublin’s inner city aimed at giving children a voice.

Minister for Communications, the Environment and Climate Change Denis Naughten

He has been the most effective Independent Minister. Despite that status, he is really a Fine Gael Minister, comfortable in this environment, though not wearing the official badge.

He has not put a foot wrong since realising there might be a way back for him to take a ministry he rightly felt should have been his in 2011. He and Kenny have returned to civil terms, and Naughten has focused on what he is best at: policy.

He has an impressive list of ticks in the first three months, including a mobile reception and broadband taskforce, steering an Energy Bill through the Oireachtas, and has big plans for a domestic energy efficiency scheme with the same funding idea as the Bike-to-Work scheme.

Makes the right noises on climate change but has yet to be tested on it. Wind farms (opposed fiercely in the midlands) might pose a problem near his own backyard.

Varadkar is the most intriguing, compelling, enigmatic, frustrating and infuriating Minister of them all. There is no doubt that if the public were to decide who the next taoiseach might be, he would win hands down.

But there have been a few moments that have given some colleagues pause for thought. His time in Health in particular will be seen, at best, as a plateau for him.

Varadkar brings a dispassionate bearing and his analysis is always good. He thinks broadly, imaginatively at times.

His public thoughts often stray into the areas of his colleagues – not always appreciated by them.

Implementation has been a bit of a problem for him. He did not endear himself to non-Fine Gaelers during Government negotiations – seen as a bit distant and detached.

There is no doubt Varadkar is talented and he has certainly hit the ground running at Social Protection. He has already got paternity benefit through, set up a survey on PRSI for the self-employed, and started tackling the scary pensions shortfall coming down the tracks.

The first Fine Gael Minister for decades in a traditional Labour portfolio, his big thoughts on welfare, social protection and job-activation will be interesting when fully propounded. But will he translate them in to action?

Seen as Varadkar’s main rival in the succession stakes, Coveney has been by far the busiest Minister since taking on Housing and Local Government.

He has had to deal almost simultaneously with three of the knottiest political problems that loomed during the election – water charges, a waste dispute, and housing and homelessness.

Early in the Government he put through legislation to suspend water charges for nine months.

His choice of Joe O’Toole as chair of the expert group backfired a little, though.

He also had to sort out the mess over changes to domestic waste charges, managing to put it all off for a year.

His third big ask was the Action Plan on Housing, to be published within 100 days of Government.

The €5 billion plan is ambitious but so was Alan Kelly’s plan in late 2014.

The big problem for Coveney is that housing takes forever to deliver, with planning and ossified processes in councils.

Coveney is now pressurising local authorities to deliver and fast-track social housing. It will be next year before we know if he is going anywhere with his plans.

For the moment he has been the most impressive.

The TD for Dublin Bay North, along with Seán Canney, has been the most impressive of the Independent Alliance members in Cabinet.

McGrath has a happy-go-lucky kind of personality and there were some who were sceptical about him cutting the mustard when responsibility came knocking.

What has helped his cause tremendously is his portfolio. It is in an area he cares passionately about. He has an adult daughter with Down syndrome and has been campaigning in this area and on behalf of those with cystic fibrosis for many years.

His approach has been simple. He is not going to expound any big philosophy or set out new thinking.

He has a list of things he wants to do, and he says he is intent on getting them done.

McGrath has set about it in a simple way, with direct approaches to the two Ministers who matter, Michael Noonan and Paschal Donohoe. His demands are seldom extravagant.

He has secured an extra €28 million to give emergency support to adults with intellectual disabilities who are middle-aged and whose parents are very elderly or who have died.

He also announced a further €3 million to help school-leavers with disabilities to bridge the gap to find employment.

Next on the list is ratification of the UN Convention on Persons with Disabilities, a Bill to help disabled people meet their high transport costs, and a cystic fibrosis unit for north Dublin.

No frills or whistles, but it is effective.