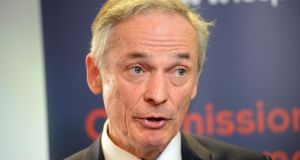 Minister for Enterprise Richard Bruton promised today a witness statement on issues relating to the current tax evasion controversy will be forwarded to relevant authorities shortly.

The alleged lengthy delay in passing on this witness statement to gardaí was one of the complaints made by Gerry Ryan, a civil servant in the Department of Enterprise and Jobs, in a dossier given to the Dáil Public Accounts Committee this week.

The document contained allegations concerning tax evasion on the part of a number of former senior political figures and one judge going back over several decades.

Gardaí also said the claims had been “fully investigated”.

In a statement today, Mr Bruton said that following on from the preliminary inquiries on matters relating to tax evasion carried out in his department since 1998, “complete files covering all issues were, following the procedures laid down in the legislation, sent during the years 2004-2010 to the appropriate authorities - the Office of the Director of Corporate Enforcement, the Gardaí, the Revenue Commissioners, the Mahon Tribunal and the Moriarty Tribunal”.

He added: “Some of these bodies have reported on the allegations in question and I understand the gardaí nvestigated them at that time and sent a file to the director of public prosecutions.”

The Minister said that in relation to the statement under section 19 of the Companies Act 1990, “following a request from me to my officials, this matter has been worked on for some time, advice is currently being finalised, and I expect that this statement will be forwarded by my department to the relevant authorities very shortly”.

He added: “This statement relates to wide-ranging and complex matters dating back over many years, and while this work was not completed as quickly as expected due to retirement of key personnel, I am advised that all matters contained in the statement are covered by the documents already submitted to the relevant authorities. I also note the statement issued by the Gardai last night in which it is stated that these matters were investigated in 2007 and that a file has been sent to the DPP.”

Mr Ryan said he submitted a 763-page report to then Fianna Fáil minister for enterprise, trade and employment, Mícheál Martin in 2007, after being asked by the minister to substantiate his allegations, and that Mr Martin sent it to the “Revenue Commissioners, the Garda Bureau of Fraud Investigation, the Office of the Director of Corporate Enforcement and the Moriarty and Mahon tribunals”.

Speaking today, Mr Martin said the clear legal advice to him in 2006 when he became awareof the alleged of tax evasion was that it be referred on to investigative bodies outside his department without delay.

Mr Ryan says he wrote to Mr Bruton on two occasions since the Fine Gael-Labour Coalition took office in 2011, as well as to Attorney General Máire Whelan. He says he prepared a witness statement at the “request of the Garda Bureau of Fraud Investigation” and submitted this to Mr Bruton.

A statement from the Department of Jobs and Enterprise said: “As a matter of course, any relevant material in relation to a case like this would be forwarded by the department to the relevant authorities.”

Sinn Féin deputy leader Mary Lou McDonald called on Taoiseach Enda Kenny this morning to clarify what contact the Government had with Mr Ryan regarding the dossier.

Mr Bruton said this is - to his knowledge - the first disclosure that has been made under the new whistleblowers legislation introduced by the Government. He said this was “a very welcome step”.

“I understand the concerns the public has about tax evasion, and it is important to reassure people that all allegations in this regard have been examined by the relevant authorities. I am aware that the Public Accounts Committee is examining these issues, and considering whether further action is needed.”

The Minister said legislation provided for an authorised officer of his department to carry out preliminary inquiries on these matters and for the forwarding the material gathered to the appropriate authorities for any further action.

“Any decisions as to whether to proceed with further action remains a matter for the relevant authorities, and further questions in relation to the progress of these investigations should be directed to those bodies.”