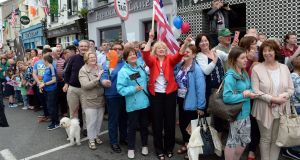 Mayo welcome: Locals turn out to greet US vice-president Joe Biden, as he walks down Garden street, home of his ancestors, at Ballina, Co Mayo. Photograph: Eric Luke/The Irish Times

Cillian O’Flaherty never makes strange – but at all of 10 months of age, he is permitted his tearful moments. One such was before a phalanx of press camera lenses in Ballina yesterday when his little face crumpled as his mother handed him over to US vice-president Joe Biden.

O’Flaherty was one of the youngest Irish relatives to meet Mr Biden and his family for the first time and it was recorded in a group photograph in the sunshine outside Heffernan’s restaurant in Ballina.

It had taken the Biden party a good hour to make it through the streets of the town, decked in US flags and bunting and lined by several thousand well-wishers.

Holding his grandson Hunter’s hand, Mr Biden broke into a skip each time he encountered children – as he had done when he met pupils from four primary schools on his arrival by US air force jet into Ireland West airport.

“Good to see ya, guys and thanks for allowing me and my family to come back,”he said repeatedly, with a large grin.

Over 160 years before,the Delaware senator’s great-great-great grandfather Edward Blewitt had left his home in Ballina’s Market Street area with his wife Mary, following their son Patrick across the Atlantic.

As Maynooth University historian Ciarán Reilly told the US visitors, Edward Blewitt had been no ordinary emigrant – if there was such in the desperate years after the Great Famine. Blewitt had trained as an engineer with the Ordnance Survey, and was then employed as an overseer for the Ballina union workhouse.

“So he gave employment to hundreds, at a time of reports of people eating their own donkeys and horses in Ballina – the epicentre of famine,” Mr Reilly said.

“Edward Blewitt saved many lives in the county which was worst hit in 1845 and after – losing 30 per cent of its entire population to either starvation or emigration,” he added.

Sadly, Edward Blewitt drowned in 1872 in the US, but Irish Family History Centre geneaologist Fiona Fitzsimons and colleagues have traced the Mayo family tree, and the relationship to the Finnegans of Louth.

Relatives, including Catherina Blewitt of the IDA and Laurita Blewitt of the Mayo Roscommon Hospice, spent over an hour with the vice-presidential party before it left for Castlebar and Westport, accompanied by Taoiseach Enda Kenny and his wife Fionnuala.

Mr Biden’s brother Jim was particularly pleased to hear of a new branch of the family. He had discovered that Irish rugby siblings Rob and Dave Kearney were fifth cousins once removed. His own son has played rugby with the University of Pennsylvania .“So tell them Jim Biden wants to track them down,” he said.

Referring to the “wonderful time” that he was having, the vice-president expressed delight that his “family had gotten bigger”.

“My mother once said to me: “Remember Joey, you are defined by your courage, you are redeemed by your loyalty and this is loyalty, man. By the way, the Bidens are coming back.”

The US party finished the first leg of its Mayo visit in Westport last night, where the Chieftains had been booked to play in Matt Molloy’s.

Mr Kenny compared the visit by the Bidens to the pilgrimage to Ireland made by the Kennedy clan. “The family has been all over the world, but never had time to do this. This is a journey with a sense of fulfilment and completeness, and both he and his family are clearly very happy to be here,”he added.

Mr Biden is due to play golf today with Mr Kenny before returning to Dublin, and then on to Louth.

1 Dublin house deaths: Three young children named
2 Boy (15) stabbed during row between gangs of youths in Dublin
3 Bodies of three children found at house in Dublin
4 What are the differences between FF and FG election promises?
5 Greens want €2.5bn a year spent on retrofitting houses
Real news has value SUBSCRIBE