U.S. President Barack Obama and Irish PM Enda Kenny meet in the Oval Office to discuss immigrants in the U.S., and Britain's position in the EU. Video: Reuters 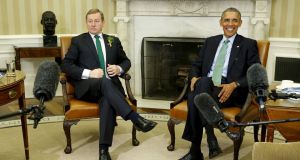 US president Barack Obama smiles as he waits for reporters to enter the room as he welcomes Taoiseach Enda Kenny in the Oval Office at the White House in Washington. Photograph: Jonathan Ernst/Reuters 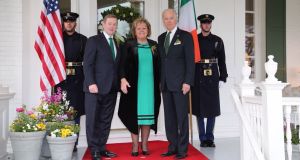 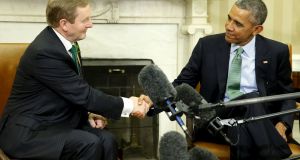 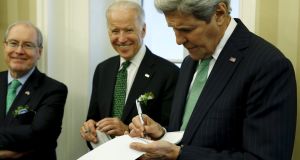 Acting Taoiseach Enda Kenny has met with US president Barack Obama in the White House as part of a day-long programme of events in the United States to mark St Patrick’s Day.

Mr Obama, speaking in the Oval Office after his meeting with Mr Kenny, made a brief reference to the general election in his remarks.

“There was just an election in Ireland, and we live at a time when there’s a lot of volatility in the electoral process,” said Mr Obama.

“But the one thing that is constant is the importance of us continuing to trade, continuing to encourage investment, and to boost jobs and opportunity in our respective countries.”

He praised Mr Kenny for bringing Ireland out of “dire straits economically” and hailed the “significant progress in the rebound of the Irish economy.”

“Much as here in the United States, we’ve seen a strong recovery, but we also are aware that a lot of work needs to be done,” he said.

The US president said that Ireland “historically has punched above its weight when it comes to humanitarian assistance, dealing with migrants who are displaced because of war, peacekeeping actives around the world.”

“Top of the morning to you,” said Mr Obama, greeting reporters into the Oval Office after his meeting with the Taoiseach.

“It is not quite St Patrick’s Day yet, but nevertheless, we always like an excuse to celebrate our Irish heritage, said the president, sporting a green tie as he sat next to Mr Keeny while address the media.

The Taoiseach said that he and the President had spoke about Britain’s referendum on remaining part of the European Union.

“I think the President was interested in the challenges that prime minister [David]Cameron faces both internally and externally, and I’ve given him an account of the workings of the European Council in bringing about the proposition that Prime Minister Cameron could actually put a referendum to his people,” said Mr Kenny.

Speaking to reporters Mr Kenny has insisted Fianna Fail have a responsibility to form a stable Government.

Speaking in Washington on Tuesday Mr Kenny said Fine Gael would work with all like-minded parties and politicians.

Asked if that included Fianna Fail the Taoiseach said: “The Fianna Fail party has a responsibility as well as every single elected member of the Dail in putting that together.

I hear differing stories from Fianna Fail but I have my priorities agreed and put in place.

“I have already invited them to work n the sense of putting together a Government that will last in the interests of the people.”

Mr Kenny is due to fly home on Wednesday to continue discussions on formation of Government.

Earlier Mr Kenny said he was committed to forming a stable Government that will last.

He was speaking at a breakfast in the home of the US vice-president Joe Biden.

Mr Kenny said Ireland had not been immune from the rise in support for “anti-austerity and populist politics”.

Mr Kenny said these politicians run from responsibility and do not have the “courage to make decisions”.

“My belief is in the short period ahead we will be able to put together a stable Government that will last the time ahead in the best interests of the country,” he said.

Mr Biden commiserated with Mr Kenny over Fine Gael’s losses in the recent general election, noting that even with his achievements during his time in government, his party lost seats.

“I can assure you if you ran in America, you would get 80 per cent of the vote,” Mr Biden said to laughs from the audience gathered at his official residence at the US Naval Observatory in north-west Washington.

“He, like all of us in politics, he did a hell of a job. He is still the most popular guy in the State, in his country and he lost. He lost seats in the last election,” he said.

The US vice president spoke about the positive can-do attitude of the Irish in his breakfast address to an audience that included secretary of state John Kerry, senators Pat Leahy of Vermont and Ed Markey of Massachusetts, Irish ambassador to the US Anne Anderson and the US ambassador to Ireland.

Mr Kenny announced last week he would cut short the original two-day programme as he was said to be eager to return home for potential discussions on forming a new government.

The decision to fly home a day early means the Taoiseach will not be present at the American Ireland Fund dinner, which has traditionally been a key part of the St Patrick’s Day programme.

Minister for Foreign Affairs Charlie Flanagan will replace him at events on Wednesday.

Mr Flanagan said it was crucial Ministers still availed of the unique opportunity to promote Ireland. “The 2016 programme is, however, significantly reduced from that delivered in 2015.

“It will focus on trade, investment and tourism promotion in a smaller number of destinations in North America, Europe, and Asia.

“In each location, ministers will undertake a number of meetings with political figures and support Irish community and trade events organised by the embassy network, the IDA, Enterprise Ireland, Tourism Ireland, Bord Bia and Science Foundation Ireland. ”

Minister for Health Leo Varadkar and Minister for Agriculture Simon Coveney will not travel.

Where are the Cabinet members going?