Alan Kelly denies Labour is hiding him away for campaign

Tipperary TD says he has been very active, participating in TV debates and interviews 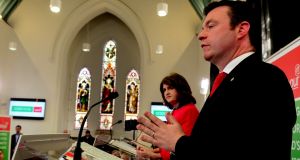 Minister for the Environment Alan Kelly says he will be playing ‘a very definitive role in the campaign in the coming week’. Photograph: Cyril Byrne/The Irish Times

Labour deputy leader Alan Kelly has denied he is being hidden away during the general election campaign.

Opposition politicians have accused the Labour party of limiting Mr Kelly’s role in the campaign.

The Minister for the Environment insisted he has been very active, citing recent interviews on RTÉ’s The Week in Politics and his participation in the deputy leaders’ debate on TV3 news.

The Tipperary TD said: “It would be very hard to hide me so I don’t think I’ve been quiet at all. I will be playing a very, very definitive role in the campaign in the coming week.”

Mr Kelly said there was a huge distance to travel in this campaign and he was confident the electorate would support the re-election of this Government.

He said: “What I’m hearing from people is they want a government that is going to be there and run the country for the next five years and continue on with the growth that we have and the economic development and job creation and many many issues.

“I believe there is a huge distance to go in this election and I believe when people focus in they will return this government.”

The latest Red C poll for the Irish Sun showed the Labour party on nine per cent in the polls.

Minister for Public Expenditure and Reform Brendan Howlin said he was confident Labour would outperform on election day.

Mr Howlin said: “The last opinion poll had us on nine per cent. That will increase and I think that we will have a very fine showing on the day.

“The final question people will ask in the final days of campaign is who do they want, who do they trust to bring the country on path of recover, to bring real change and to support themselves and their family.”