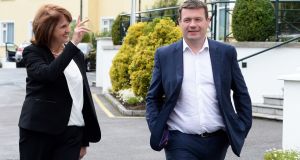 Tánaiste Joan Burton has insisted her deputy leader in the Labour Party, Alan Kelly, is an “obedient employee”.

Ms Burton was questioned about an interview Mr Kelly, the Minister for the Environment, gave last weekend in which he claimed he was his own boss.

Speaking on Wednesday after the election date was set and 31st Dáil was dissolved, Mr Kelly said: “Joan is definitely the boss of the Labour party believe me.”

In response, Ms Burton said: “He is an incredibly obedient employee.” She later clarified he was also her colleague.

There were also reports of an alleged dispute between Mr Kelly and Taoiseach Enda Kenny over the election date.

Mr Kelly denied there was any tug between himself and Mr Kenny insisting they both shared the view it should be held on February 26th.

Mr Kelly and Ms Burton were speaking as they addressed Labour staff as the election campaign kicked off, urging them to get out and sell the party’s message to voters.

Ms Burton said the election would be a contest between hope and optimism offered by Labour and Fine Gael, or the opposition who portrayed Ireland as a “dark dull” place.

“That’s why they want to portray. Voters have a choice and they are now going to have their supreme three weeks. It will be a very short election,” she said.

Ms Burton also confirmed Labour would commit to free GP care for all in their election manifesto.

This follows confirmation by Minister for Health Leo Varadkar that Fine Gael could not commit to the introduction of universal care in the next Dáil term due to a shortage of GPs.

Snow and ice warning issued as communities battle floods 21:38
GP censured over failure to refer suspected meningitis cases to hospital 20:49
Shannon floods: ‘The only way they will get me out of my home is in a box’ 20:43
Ireland ‘lagging well behind’ in newborn screening programme for rare diseases 20:41
Fianna Fáil's Tom Brabazon elected Lord Mayor of Dublin 20:07