Analysis: all that’s left now is for the taxpayer to pay the legal bill 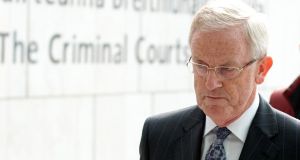 “The shortcomings of our processes for investigating corruption are all too obvious today following the release of this chapter and last week’s collapse of the corruption trial because of the illness of former lobbyist Frank Dunlop.” Photograph: Collins Courts.

The publication yesterday of the “missing chapter” from the planning tribunal’s final report represents the final act of an inquiry that started 16 years ago and is likely to cost more than €300 million. All that’s left now is for the taxpayer to pay the legal bills.

The shortcomings of our processes for investigating corruption are all too obvious today following the release of this chapter and last week’s collapse of the corruption trial because of the illness of former lobbyist Frank Dunlop.

In summary, the experience of the last two decades would appear to show we are good on censure but weak on meaningful follow-up in the form of successful criminal prosecutions.

At the end of it all, the answer to the question many people asked on learning of the extent of corruption in Dublin planning in the 1980s and 1990s – “Will anyone go to jail for this?” – is a curt “hardly anyone”.

After all the media revelations, official investigations and trials, the list of those jailed is but two names long: Dunlop, who confessed to his involvement in corruption, and former Fianna Fáil minister Ray Burke, who spent 4½ months in prison for making false tax returns.

The former Dublin assistant county manager George Redmond, who features again in the chapter published yesterday, had his conviction quashed after spending time in prison. The late Fianna Fáil TD Liam Lawlor also ended up behind bars, not because he was found to be corrupt, but because he was in contempt of court.

It’s not a situation conducive to the elimination of the “culture of impunity” that prevailed during the worst era of planning abuses in Dublin. Those at the centre of the web of corruption that operated on the county council at this time felt they were invincible and while some have paid the price of adverse publicity, many would argue that those involved have not paid a sufficient price for their wrongdoing.

Add to this the questionable situation – forced on the tribunal by a decision of the Supreme Court – whereby some of those who were found to be involved in corruption will still have their multi-million legal costs paid by an impoverished State and one can understand the level of public anger on the issue.

The land at Carrickmines which was the subject of the tribunal’s report perfectly illustrates the role of rezoning in making massive windfall profits for landowners. The Jackson Way land was zoned for agriculture, had poor access and was in the line for the M50 motorway, yet by dint of rezoning it ended up as a highly valuable property.

Its owners, masked behind layers and layers of offshore companies, sought as much as €91 million in compensation for just that part of the land used for the motorway. An arbitrator reduced this to €12.8 million but the money was frozen on foot of an application by the Criminal Assets Bureau, which suspected it represented the fruits of corruption.

The question now, following the collapse of the Dunlop trial, is what will happen to this money. Businessman Jim Kennedy, who co-owns the land, could be in line for a big payday now that the criminal charges against him - which he denies - have been dropped. Tribunal findings cannot be used as the basis of criminal proceedings, so the tribunal’s conclusion that he engaged in corrupt activity with Dunlop to secure the rezoning by paying councillors is unlikely to matter much in a courtroom.

The Carrickmines chapter of the tribunal’s report follows the pattern seen in the overall report published last year. The tribunal has decided to accept the broad thrust of Dunlop’s evidence while criticising and rejecting some of it.

Thus, it finds that Dunlop’s payments to councillors Don Lydon, Colm McGrath and Liam Cosgrave were corruptly made to secure the rezoning of the Carrickmines lands in two votes in the 1990s. But it ruled as unreliable his recollection of paying money to two other deceased councillors – Cyril Gallagher and Jack Larkin of Fianna Fáil – and did not make corruption findings against them.

Kennedy, who has addresses in Gibraltar and the Isle of Man, is a dimly-perceived figure here in Ireland. He refused to come home to give evidence, telling his business partner he didn’t want to have his affairs “torn apart” at the tribunal. As a result, the tribunal had to rely on others to describe his role in events; one, quoted in the chapter published yesterday, recalls him as being “perceived as a hustler, wheeler-dealer type who is probably devious and certainly litigious”.

The tribunal once intended to hold public hearings into the involvement of Lawlor and Kennedy in six land parcels in west Dublin but gave up on this plan after Lawlor’s premature death in a Moscow car crash in 2005. More’s the pity for the light that would have shed, but the report still finds evidence of a “wide-ranging corrupt relationship” between Dunlop and Lawlor in which the politician used his position for his own personal gain.