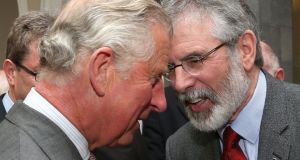 Gerry Adams’s handshake with Prince Charles came after Sinn Féin held a series of meetings with a number of victims’ groups in the North as well as sceptical elements within the party on both sides of the Border. Photograph: Brian Lawless/AFP/Getty Images

Sinn Féin must be cautious in its engagement with the British royal family in order to ensure the stauncher republican element of the party continues to support the leadership.

While a handshake might seem like the most natural thing in the world, some Sinn Féin members still regard such an interaction with Prince Charles as a giant leap.

So there was a slight sense of giddiness within the party on Monday night when it emerged that leader Gerry Adams would meet the heir to the British throne.

And rather than reluctantly participating in events organised by others, the request for a private meeting between the two had actually come from the Sinn Féin side.

Over the years, Adams has been less than complimentary about the prince’s position as colonel-in-chief of the British army’s Parachute Regiment.

As recently as last month, he spoke about “the grievous wrong they have done, including to the people of Derry and Ballymurphy, where I grew up”, referring to the killing by paratroopers of 14 civilians on Bloody Sunday in 1972 and the 11 people killed by British soldiers in west Belfast the previous year.

The delicate proposition that Sinn Féin representatives should participate in public events during the visit was floated at a party ardchomhairle meeting last Saturday.

The reaction was by no means unanimous, but the majority were wise to the direction the leadership had been pushing in recent years.

Taoiseach Enda Kenny has said everything he does between now and next spring will be seen as being motivated by how it will affect his party in the general election. The same applies to Adams.

Sinn Féin has made no secret of its wish to appeal to new, middle class voters.

So the toddling towards reconciliation continues, while the rhetoric remains resolute.

On the day he shook hands with Lord Mountbatten’s great-nephew, Adams said he regretted what had happened when an IRA bomb detonated in Mullaghmore, Co Sligo in 1979.

But he stood over his comments delivered in the aftermath of the atrocity: “With his war record, I don’t think he could have objected to dying in what was clearly a war situation. He knew the danger involved in coming to this country.”