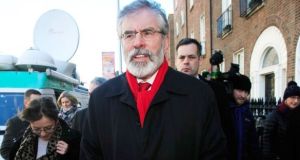 Sinn Féin leader Gerry Adams has said the Special Criminal Court does not work and witnesses can be protected from intimidation without recourse to so-called emergency legislation.

Asked if the fatal shooting in the Regency Hotel in Dublin illustrated the need for such a non-jury court, the Louth TD said journalists’ the use of the term “gangland” killings was lazy.

“Those murders wouldn’t have happened if the Special Criminal Court worked. It doesn’t work,” he said.

Mr Adams said domestic and international human rights and civil liberties bodies, along with the Belfast Agreement, advocated the need for “normal laws which deal with people on the basis of justice, that people can be tried by their peers and therefore should suffer whatever sanction comes out of that”.

Sinn Féin’s manifesto will contain a commitment to abolish the Special Criminal Court.

Prominent republican Thomas ‘Slab’ Murphy, of Ballybinaby, Hackballscross, Co Louth, described by Mr Adams as a “good republican”, is awaiting sentence after being found guilty by the Special Criminal Court in December of failing to furnish tax returns for nearly a decade from 1996.

Speaking at a Sinn Féin event on Sunday, Mr Adams said other jurisdictions managed to protect witnesses without recourse to what he described as a “lazy option”. Gardaí needed all the support they could get but stations had been closed and necessary resources withdrawn, he said.

Pressed on how witnesses and juries should be protected, he said: “In Britain, across the European Union, in the USA, they have witness protection programmes and they deal with criminality and they bring those who are accused and they are subject to due process.”

He added: “There is no need for what was brought in as so-called emergency legislation 40 years ago and which has no basis in natural law or in the accepted norms of the law that a person has the right to be tried by a jury of their peers.”

Where there were “special threats” to witnesses or jurors, the type of measures which he said had worked quite well in other jurisdictions, but still allowed a person to be tried by a jury of their peers. should be used.

“I spent four-and-a-half years in prison without any trail at all. Do you think that’s fair?”

A Sinn Féin spokeswoman later clarified that protection measures could include having an anonymous jury; screening the jury from public view; protecting the jury during the trial or locating the jury in a different place from where the trial is being held with communication by video link.

“Many states hear difficult cases without removing the right to a jury trial,” the spokeswoman said.