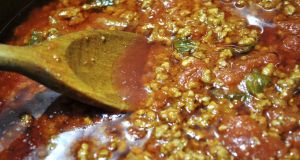 Italy has seen its share of heretics. Galileo spent his final years under house arrest for insisting that the Earth orbited the sun.

In Bologna, a brave marketing executive has dared to put forward a theory that will be considered equally unthinkable - perhaps even blasphemous: that the dish known in Ireland and Britain as spaghetti bolognese exists in Italy and is perfectly acceptable.

This will be news to many Italians, who have derided the dish as a gastronomic aberration for decades.

But, much like Galileo himself, Piero Valdiserra claims to have found proof.

His examination of old texts found that - far from being a figment of the British culinary imagination - spaghetti bolognese, or spaghetti al ragu, as it would be known in Italy, dates back five centuries in Bologna.

Controversy surrounding the dish resurfaced last month, when Antonio Carluccio became the latest in a long line of chefs to complain that one of Ireland’s favourite “Italian” dishes did not, in fact, exist in Italy.

Massimo Bottura, whose restaurant in Modena, Osteria Francescana, was named the best in the world this year, has also complained about “crazy versions” of the pasta dish.

Their main beef with spag bol is that it uses spaghetti, rather than the authentic fresh tagliatelle made with eggs, and that the meat sauce served on tables across Ireland and Britain is corrupted by herbs such as oregano and basil, sometimes - gasp - even garlic, when it should not contain any.

Given the long-simmering controversy, Valdiserra, a native of Bologna, took it upon himself to study the issue.

“There was nothing that existed that covered this topic, in the sense that there were a lot of jokes, it was considered something funny, but nothing had been done in a serious, scientific way,” he told The Guardian.

What he discovered was that spaghetti has been consumed and produced in Bologna and in the neighbouring countryside since the 16th-century.

While spaghetti - dried pasta - is usually associated with southern Italy or coastal cities, he said it could without a doubt be considered traditional in Bologna.

“As far as I am concerned, I remember myself, my friends, my relatives and families, consuming spaghetti al ragu forever, so it is not only a matter of documents, but also family history,” he said.

So why do people from Bologna insist that tagliatelle is the only way to go?

Historically, Mr Valdiserra said, tagliatelle was consumed by wealthy people who could afford to make the fresh pasta, while normal people tended to consume the egg pasta only on special occasions.

Mr Valdiserra claimed the dish became enshrined in local tradition because restaurants focused on serving the dish with tagliatelle, in part because fresh pasta cooked faster.

The fact that a slight variation on a local classic has caused so much controversy is not a new phenomenon in Italy, where even a Michelin-starred celebrity chef was lambasted by a local mayor for admitting he added a touch of roasted garlic to his amatriciana sauce.

Italians’ rigid adherence to cooking traditions, Mr Valdiserra said, is linked to the false belief that they have not changed much over centuries.

Mr Valdiserra said he hopes that his research and new book on the topic, Spaghetti Bolognese: The Other Side of Tradition, will inspire other locals to see the error of their ways and embrace the controversial dish, if for no other reason because the furore could attract more interest in Bologna.

“In our city, it was really a matter of big discussion: people who are in favour, people who are against. Our city is now burning a little bit from this point of view,” he said, with a laugh.

As for the dish itself, Mr Valdiserra still thinks tagliatelle is the “most suitable” pasta.

“But this does not prevent the fact that, spaghetti, when they are well-chosen, well-cooked, dressed with a good sauce and maybe enriched with parmigiano cheese, are fantastic as well.”