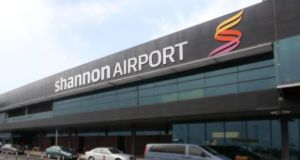 The flight touched down safely at 8.14pm and was able to taxi directly to the terminal building where it was met by airport police officers and gardaí.

An elderly woman was arrested on Friday night after the flight on which she was travelling was forced to divert to Shannon Airport.

It’s understood that the woman became disruptive on board the transatlantic jet and that at least one cabin crew member was assaulted.

The woman, who is believed to have been travelling in the First Class cabin, had to be restrained by cabin crew members who alerted the flight crew.

The pilot made contacted with the Irish Aviation Authority’s (IAA) North Atlantic Communications Service centre at Ballygirreen in Co Clare and advised them of the situation and requested the authorities to be on standby for their arrival in Shannon.

Gardaí­ and airport police officers were standing by for Air Canada flight ACA-877 when it landed at Shannon at around 8.15pm.

Airport emergency services were standing by at strategic locations along the runway so that they could follow the aircraft once it had landed.

The Boeing 777-300 jet was en route from Frankfurt, Germany, to Toronto and was over 1,000 kilometres north west of Shannon when the crew opted to turn around.

The flight looked as if it was routing towards the United Kingdom and had been handed over to the Scottish air traffic control however, just north of Tory Island off Donegal, the flight turned southwards and began heading towards Shannon.

The crew also dumped aviation fuel over the Atlantic to ensure they could touch down within safe landing weight limits. The crew reported a problem with the fuel dumping procedure which they appear to have resolved later.

The flight touched down safely at 8.14pm and was able to taxi directly to the terminal building where it was met by airport police officers and gardaí.

The woman was arrested and taken to Shannon garda station for questioning.

According to one report on Twitter, the woman had to be restrained.

A Garda spokesman confirmed that an 87-year-old woman had been arrested and was being questioned about the incident.