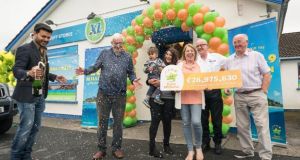 A west of Ireland syndicate has been revealed as the winner of the €29 million EuroMillions jackpot.

Their substantial slice of luck has now tipped the Irish total to over €1 billion since the European draw was introduced over a decade ago.

However, such is the level of secrecy around their identities, details about the number of people and the individual cash amounts are being kept tightly under wraps.

“This has come as a huge shock but we are thrilled. This will certainly make life easier for us all and will secure our futures,” one of the newly-minted stakeholders said after collecting the cheque in Dublin on Friday.

“It has been a roller coaster week with lots of butterflies in our stomachs and lots of different emotions.

“But we are keeping level heads and we will try to take it all in and we will give it time before we decide what to do with our winnings.”

They realised their good fortune last Saturday when one of the members checked the numbers.

It is the second EuroMillions jackpot win for Castlebar and the eleventh in Ireland since it began in 2004.

In April 2014, a €15 million jackpot winning ticket was sold at Staunton’s Costcutter Express in the town.

National Lottery chief executive, Dermot Griffin, said it is important the winners take their time to let the news sink in.

“This is an incredible amount of money to win, and we have recommended that the winners get independent financial and legal advice,” he said.

The most recent Irish EuroMillions jackpot winner was a Dublin work syndicate who shared €88.5 million in January.