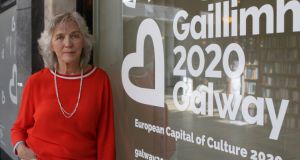 Hannah Kiely is a former president of Galway Chamber of Commerce and former board member of the Galway Arts Centre. “I’m hoping Galway will set the gold standard for this title in Europe.”

Ms Kiely (57), a leading financial adviser and former president of Galway Chamber of Commerce, is charged with overseeing a €45.75 million budget to develop the arts programme for the western cultural capital in less than four years.

Ms Kiely told The Irish Times her focus would be on “legacy and capacity building” to ensure that the creative talents of a new generation of young artists are tapped during and after the prestigious title year.

A creative director will be appointed in July, and two other key appointments – operations and communications directors – would also be filled shortly.

She envisages up to 40 people may be employed in programming, communications, logistics and health and safety.

“I’m hoping Galway will set the gold standard for this title in Europe, and I’d like to ensure creativity becomes more mainstream – without becoming mainstream,”she said.

Last year, Galway’s expenditure of €1.8 million on securing the title was criticised by Sinn Féin Senator Trevor Ó Clochartaigh, who said that rival bids by Limerick and the Three Sisters (Kilkenny, Waterford and Wexford) cost about a quarter of this.

Galway City Council responded that the return on the investment would be around 1,500 per cent.

Ms Kiely said she believed the investment would give multiple returns.

She stressed that Galway city shared the title with the county, and would work with other regional partners – as in the counties of Donegal, Leitrim, Sligo, Mayo, Roscommon, Westmeath, Offaly, Tipperary and Clare.

A previous board member of the Galway Arts Centre and a holder of a businesswoman of the year award, Ms Kiely has extensive leadership and governance experience, and a strong track record in the cultural, community and voluntary sectors.

She has sponsored and worked with many arts, sports and community organisations, and is said to have been instrumental in raising well over €120 million for the film industry.

She is known for her work with Cope Galway which is developing a new domestic violence refuge for women and children in a former Sisters of Mercy convent, beside the city’s former Magdalene laundry.

Ms Kiely was one of more than 50 applicants from Ireland, Europe and around the world for the post, and her appointment has been welcomed by Minister for Arts Heather Humphreys.

Ms Humphreys’s department is allocating €15 million towards the total budget.

Galway 2020 board chairwoman Dr Aideen McGinley said Ms Kiely has “an incredible skill set which spans both the business and cultural sectors at a local, national and international level”.

“Her understanding and empathy for the wider ambitions of Galway will ensure that the Galway 2020 company will be able to hit the ground running,” she said.