Tens of thousands of protesters converged on Dublin’s O’Connell Street on Saturday where a rally calling for the abolition of the planned water charges was held. 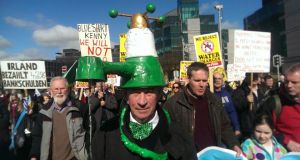 Marchers are converging on O’Connell Street for a rally at 2pm. Photograph: Pamela Duncan 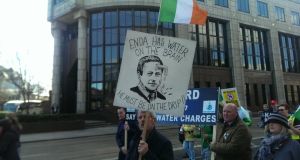 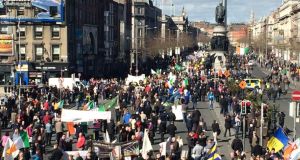 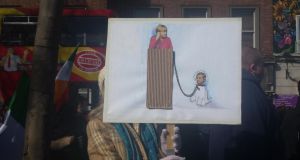 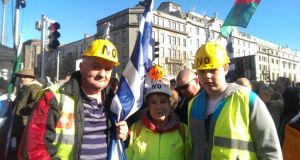 Right2Water have issued a statement estimating that 80,000 attended the rally in dublin on Saturday. Photograph: Pamela Duncan 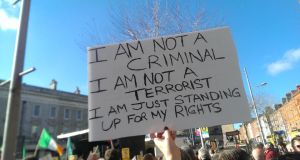 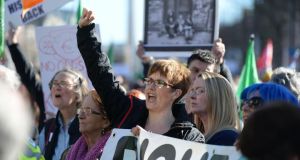 Tens of thousands of water charge protesters converged on Dublin’s O’Connell Street on Saturday where a rally calling for the abolition of the planned charges was held.

Protestors marched from locations around the city centre to O’Connell Street where the crowd stretched back from a stage set up in front of the Parnell statue, to Bachelor’s Walk.

Organisers Right2Water estimated approximately 80,000 people attended. However a garda estimated the crowd at between 20,000 and 30,000, although he stressed that this was an approximate figure.

Gardaí said there was no trouble during or after the rally.

TD Ruth Coppinger encouraged people at the rally not to pay the water charge.

“There are no penalties for non payment for one whole year and three months...by which point there will be a new government,” she said.

Addressing the crowd Richard Boyd Barrett said Taoiseach Enda Kenny was “a clown...because only a clown could plan to send out bills for a despised, unjust and unwanted water charge on April Fools’ Day”.

“But the people are no fools,” he said, before leading the crowd in chants of “Enda Kenny, not a penny” and “No way, we won’t pay”.

Independent TD Thomas Pringle encouraged those present to “keep up the fight, bring it home to your communities...we will not pay your unfair charges”.

“On April 1st tell your friends, your neighbours and your colleagues to bin their bills and bin every one that comes after it because right is on our side and we will win this battle.”

Stephen Fitzpatrick of the Communications Workers Union called for the ownership of water to be protected in the Constitution.

He called for a referendum to add the following words to the Constitution: “The Government shall collectively be responsible for the protection, management and maintenance of the public water system.

“The Government shall ensure in the public interest that this resource remains in public ownership and management.”

“That’s all we want, we already own it, protect it,” Mr Fitzpatrick added to applause.

General secretary of Mandate Trade Union John Douglas said there had been a “massive turnout again despite naysayers saying it would be a dismal turnout”.

“It is a big demonstration despite all the so-called concessions the Government have given which was an attempt to buy the public. They obviously haven’t succeeded in buying the public.

“Will the Government change? No...and they will ultimately pay the price in the ballot box.”

A stage was set up at the Parnell Street end of O’Connell Street with big screens located at a number of points along street.

Speaking from stage Mary Curtis, who described herself as “a mother and grandmother”, from Dundalk Says No, said water charges came on top of continuous cuts, which would no longer be tolerated.

“We have a new ‘workhouse’ in this country,” she said. “It’s called ‘emergency housing’. They put our people into one room in hotels and they say, ‘We’ve given you a roof over your head’. But they have stolen the roof from over their head....The homeless are dying on the streets of this city...Austerity is directly linked to suicide.”

Memet Uludag of People Before profit and the Irish Anti-Racism Network, spoke in the context of UN World Anti-Racism day.

“We say today water is a human right. Black and white, we will unite and we will fight. From Bolivia, to Detroit, to Greece, people have been fighting against cuts, against austerity”.

Bernie Hughes, who was one of four anti-water metre protestors jailed last month for defying a court order not to come within a 20-metre of a water metre installers, said the media had “pestered” campaigners at a press conference last week about how many people would attend today’s rally.

“Numbers, numbers, numbers...Well I’m asking them, is this number good enough for you?,” she asked gesturing to the crowds, to loud cheers. She said the numbers would “put the skids up” the “Government and the elite who are trying to break this campaign”.

‘They’re not listening to us’

Earlier, thousands crossed the River Liffey, having departed from Merrion Square. A large group from Connolly Station also made its way towards the rally point. A third group making its way from Heuston Station took 25 minutes to pass by Ha’penny Bridge along the north quays.

Marchers carried Irish flags and some Greek flags and protestors from around the country were represented, walking under banners from Athlone, Waterford, Kilkenny, Tipperary, Cork, Tralee, Macroom, Rochfortbridge, Cobh, Arklow and Donegal among others.

Dublin was also well represented with banners from Stoneybatter/Montpelier, Dun Laoghaire, Walkinstown, Edenmore, Coolock, Tallaght and Deansgrange among them.

Eddie Fleming, a retiree living in Waterford, said he had travelled to join the march because “The bankers are getting away away with everything as are the property developers yet we are being asked to pay for water which should be free” .

“I am here on my own behalf...it’s just a personal stand. We pay enough in taxes” he said.

Teresa Corcoran, a housewife from Carrick-on-Suir, Co Tipperary, said she was protesting “so the Government might listen to us because they’re not listening to us”.

“I can’t afford to pay any more bills,” she said.

Paul McLaughlin from Inishowen in Donegal travelled for four-and-a-half hours by minibus to join today’s protest. He was on one of what he said were a number of busses from Donegal especially commissioned to bring people to today’s rally.

Mr McLaughlin, who is a member of Sinn Féin, said he was there in a personal capacity.

“It’s been going on so long now people just have to stand up...we’re paying for everything through the nose. There’s so many charges. We’re out working and we’ve got nothing to show at the end of it. We’re really struggling, they’re really squeezing us to the limit.”

This week Irish Water said 990,000 households had registered for the water charges to date which the company said is approximately 66 per cent of its total domestic customer base.

A spokeswoman for Irish Water said a further 247,000 households which are not liable for Irish Water charges (for example those already paying for their own water supply through a group water scheme or a private well) have also registered with the utility.