FROM THE ARCHIVE: MP Tom Elliott was a member of the Ulster Defence Regiment during the Troubles. He takes us back to the areas he used to patrol, telling us what life was like back then. Video: Enda O'Dowd 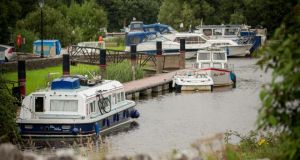 If you wandered into an Irish bar late at night during the years of the Troubles, chances were you’d hear a crows’ chorus working through the repertoire of rebel songs.

Invariably somebody would stand up to give a hoarse rendition of Only Our Rivers Run Free, Mickey MacConnell’s great, plaintive ballad from 1965 bemoaning the divided island of Ireland.

The irony is that it was not strictly true: not all rivers ran quite as freely as the song suggested. Even before partition in 1927, many working waterways, rivers and canals that connected Border counties such as Leitrim and Cavan in the South, and Fermanagh and Armagh in the North, had fallen into disuse. Once redundant to boat traffic they become neglected, overgrown and – eventually – impassable. The Border and its deep divisions within communities made their reopening an impossibility.

The benign wash from the developing peace process changed all that. In the late 1980s both British and Irish governments announced a flagship cross-Border project, a 63km canal that would restore the long-moribund link between the Republic’s longest river, the Shannon, and the extensive Lough Erne waterways.

Increasing cross-Border co-operation led to the creation of six North-South “implementation bodies”, including Waterways Ireland. Today, it manages more than 1,000km of inland navigable waterways, North and South, including the Shannon- Erne system, mainly for recreation and tourism.

The canal that connects both waterways starts at Leitrim village, a picturesque hamlet so remote that Éamon de Valera safely hid there for a while during the War of Independence in the 1920s.

Speaking about life before the restoration, John Pierce, who owns the Barge pub and restaurant, says: “Sure, there was nothing here. People were just passing through quickly. Without the waterways you could forget about this place.”

Just outside the village, a barge ghosts slowly through the trees towards Battlebridge lock. It stops between the gates. The lock-keeper opens the sluice and the water cascades out to allow the boat lower to the right level. The scene is taciturn, silent, timeless. The Dutch family on board extol the virtues of their peaceful journey.

Waterways Ireland’s latest project is the Blueway, a 200km-long trail alongside the waterways. Every project so far has spurred new restaurants, bars, boat- and kayak-hire firms, cycle-hire shops or watersport and adventure companies.

Britain leaving the European Union will not pose an existential threat to Waterways Ireland but the transition brings difficulties. While a physical border may not materialise, SDLP MP Mark Durkan has warned that an “incipient borderism” mindset could follow, in time.

Moreover, like the other North-South institutions, Waterways has depended heavily on EU funding. In all, €1.5 billion has come from Brussels over the years, helping to fund big-ticket schemes such as the Peace Bridge that spans the Foyle in Derry, the Skainos centre in east Belfast and a science park in Co Derry.

Already the effects of the Brexit vote are being felt. Máirtín O Muilleoir, Sinn Féin Minister of Finance in the Executive, recently said Brexit had placed real doubt over €1.1 billion in funding for Northern Ireland. Reassurances from British chancellor of the exchequer Philip Hammond do not extend beyond 2017. More urgently, 17 “ready-to-go” projects in Border counties worth €120 million are now logjammed.

“For too long we here in Co Louth and our neighbours in Co Down and Co Armagh had our backs to each other,” he says. “That has changed. There are EU signs in nearly every village. There has been renewal and connectivity. There is no Border town that has not benefited from EU funds.”

Tourism Ireland has been the biggest Border success story, marketing the whole of Ireland abroad. Visitor numbers are at record levels, exceeding 10 million for the first time last year. Numbers from Britain to the island jumped by 16 per cent last year, says Tourism Ireland chief executive Niall Gibbons. Sterling’s fall will hit numbers planning to head to Ireland, though.

Nevertheless, Northern Ireland, still using sterling, is increasingly attractive to visitors. It share of the market has grown to 20 per cent, helped by the Titanic Quarter, golf courses and priceless publicity provided by Game of Thrones. However, the retention of the common travel area is more important to the tourism industry than any temporary boost from currency fluctuations. Of those who visit the North, up to three-quarters enter from the Republic (81 per cent of all visitors to the island arrive in Dublin Airport).

Gibbons points to an Oxford Economics prediction of a 2.5 per cent fall in British travelling abroad. Ireland will experience the effects of that. “The common travel area is vital. Politicians must reinforce that message,” he says. Irish-UK visa deals need to be kept too, he says.

“There are huge advantages for the North and South to be working together,” says Gibbons. “It is better to have Rory McIlroy and Pádraig Harrington on the same team rather than competing against each other.”