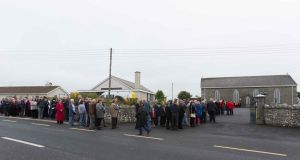 Crowds queueing to pay their respects at the removal of Caitríona Lucas at Liscannor, Co Clare, on Wednesday. Photograph: Eamon Ward 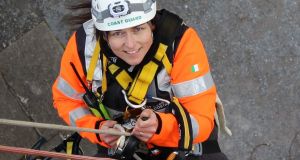 Caitríona Lucas, who died during a search operation at Kilkee, Co Clare.

Members of rescue organisations from across the country were among the thousands to turn out in Co Clare on Wednesday night to mourn the death of Doolin Coast Guard volunteer Caitríona Lucas.

Crowds started to queue on the main street of Liscannor village well before 5pm on Wednesday, so that they could express their sympathies to Caitríona’s husband Bernard, their two children, Ben (20) and Emma (18), and her extended family at her removal in Liscannor church.

Ms Lucas (née Deely) became the first member of the Coast Guard to die on active duty when taking part in a search operation for missing Lissycasey school inspector David McMahon (33) at Kilkee on Monday.

Speaking outside the church on Wednesday night, the officer in charge of Caitriona’s Doolin Coast Guard unit, Mattie Shannon, said that his unit took strength from the numbers from the “one big family” of Ireland’s rescue organisations attending the removal.

Mr Shannon said that they “are like-minded people and they can sympathise with what is going on”.

He said: “They are at the bare-face of it themselves every day in that sense, and unfortunately it has come to our door.”

In the queue, members of the unit were seen embracing and offering each other support.

Mr Shannon said Ms Lucas’s death “is a big loss to us”, but he took consolation that she died doing what was her passion in life.

“We are happy that she loved doing what she was doing and we can take solace from that. That is what she wanted to do.”

Mr Shannon remembered her as “a fantastic person”.

Groups represented at the ceremony included rescue units from Achill, Kilkee, Crosshaven and Kilrush, as well as the Cork City Fire Brigade.

Mr Shannon said: “I just met one lady and we rescued her husband, a fisherman, on September 3rd six or seven year ago.”

Mr Shannon also said that it must be remembered that hundreds were still out searching for Mr McMahon.

Operations manager with Irish Coast Guard, Gerald O’Flynn, had visited the Lucas home earlier to offer his support to the family.

“On a human perspective, it is just awful, awful.

“It is particularly sad because Doolin is one of the busiest units in the country and we have no doubt that they have been involved in much more difficult missions.”

Outside Liscannor church, Mr O’Flynn said that Ms Lucas was “a person driven by serving her community and it is so sad that she has paid the ultimate sacrifice in just trying to serve her community as best she could.

“The additional tragedy is that her family are such an integral part of the unit.”

Mr O’Flynn said: “We know that the weather wasn’t horrendously bad, that it wasn’t night-time. There is nothing to suggest that it was nothing more than extreme bad luck.”

Ms Lucas’s funeral Mass takes place Thursday at 11am, with burial after at Kilmacreehy cemetery, Liscannor. 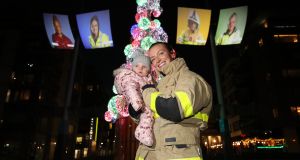