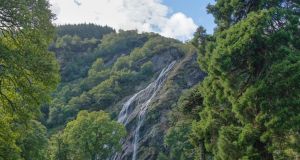 A teenage boy has died after a fall at Powerscourt Waterfall in Co Wicklow on Wednesday.

Gardaí attended the scene of the fatal incident in the Powerscourt Estate, House and Gardens. The incident occurred at approximately 2.30pm.

“A male teenage youth was pronounced dead at the scene,” said a Garda spokesman.

“His body has been removed to the mortuary at St Columcille’s Hospital, Loughlinstown, where a post-mortem will be carried out.”

The spokesman confirmed that investigations are ongoing, although it is understood the incident is being treated as a tragic accident.

A second individual was rescued near the top of the waterfall by the Coastguard’s Rescue 116 helicopter.

“We were called in by the fire service,” said a spokesman. “A helicopter was requested in relation to a suspected faller. Rescue 116 was tasked and attended the scene. A second casualty was airlifted to safety. He did not require medical assistance.”

Powerscourt Waterfall is 6km from the main estate and is 121 metres high. The area is popular with climbers, although there are numerous signs at the amenity warning people not to climb the rocks above a certain level.

The area is also popular with picnickers and families, many of whom hold barbeques there.

Minister for Higher Education and local TD Simon Harris paid tribute to the coastguard for its efforts in saving the second individual.

“Such sad news emerging in County Wicklow from our beautiful Powerscourt this evening,” he said on Twitter. “Thoughts of all our community are with the family and friends of the teenager. Thank you to the @IrishCoastGuard for all their efforts.”