Midden sites among coastal features damaged from Kerry to Donegal 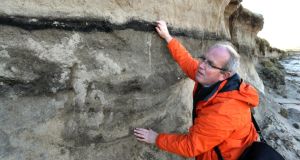 Archaeologist Michael Gibbons at the area on Omey Island where prehistoric remains were revealed by damage caused by the Atlantic storms. Photograph: Joe O’Shaughnessy

Destruction wreaked along Connacht’s coastline in the recent storms has exposed archaeology dating back to the Neolithic period on Connemara’s Omey island. Large linear archaeological deposits of up to a metre thick have been exposed on the western and northern shorelines of the tidal island off Claddaghduff.

Two sets of medieval burial sites, traces of sunken dwellings and parts of a Neolithic bog, which had been covered over millenniums by shifting sands, have been revealed.

Clifden-based archaeologist Michael Gibbons has classified the weather impact on Omey as “spectacular”, but says that many important archaeological features, such as midden deposits, have been destroyed along the Atlantic rim in the “severe beating of Connacht’s coastal dunes” since mid-December.

Kitchen middens, or shell heaps, are ancient waste repositories which offer invaluable clues about diet and lifestyle of our predecessors.

Out on Omey in recent days, as winds and swell began to ease, Mr Gibbons confirmed that sand-cliff sections up to 100 metres long had revealed the archaeological deposits.

The burial sites now visible were part of a medieval settlement excavated in the 1990s by Prof Tadhg O’Keeffe of University College Dublin, when an earlier storm revealed traces of a monastic enclosure, he said.

The sunken houses of which there are traces date from the 18th and 19th centuries, while the churning up of an ancient bog by recent tidal surges has turned blue sea to brown. Mr Gibbons estimates the bog, at the base of the sand cliffs, to be at least 6,000 years old.

Féichin Mulkerrin, who works for the Office of Public Works, said middens on Omey were affected. Twenty metres of sand was dislodged in the swell on the northwest, while the sea came right up to the gate of the new graveyard. “We haven’t had tides this high since 1991 and previous to that in 1963, and it was the series of tides that really made an impact, affecting all of the islands,” Mr Mulkerrin said.

Midden deposits extending from inner Galway Bay, up by Dog’s Bay near Roundstone to Mulrany in Mayo were lost, with one of the oldest in Connacht, a late Mesolithic midden site on the Renvyle peninsula, also being a casualty.

Cromwell’s fort on Inishbofin was hit, according to Mary Lavelle of D’Arcy’s Orchard on the island’s east end. “On the same night that we lost the harbour light, a lump was taken out of the fort on the harbour side,”she told The Irish Times.

On neighbouring Inishark, which the last 24 residents were forced to quit in October 1960, there was evidence that the graveyard close to shoreline was damaged, Ms Lavelle said.

In the Ballyconneely area of Connemara, the “bawn wall”, or enclosure around Bunowen castle, was undermined by the sea swell. Bawnmore is best known as a former home of Grace O’Malley, who married Dónal an Chogaidh O’Flaherty there in 1546.

“The biggest damage has to be the whole system of coastal midden sites, which may also be affected on the Donegal and Mayo coasts and which contain pottery, seeds, charcoal and other evidence of coastal settlement,” he says.

In Kerry, the wreck of the Sunbeam lying on Rossbeigh beach was lifted in the storms, prompting a court application for protection by the Department of Arts, Heritage and the Gaeltacht. The ship, built in 1860, foundered in 1903; is a national monument as it is more than 100 years old.

The department said it had received a number of reports of damage to monuments on the west and south coasts and two reports of very minor damage to State monuments in the east. It said was in “ongoing contact” with regional staff and partners in the heritage sector, including the Office of Public Works and local authorities in the most affected areas, to identify the full extent of the damage to archaeology.

However it would be a number of weeks before the full scale of it became apparent.