A number of people have been injured following a stand-off at a squatted property on Grangegorman Road Lower, in north Dublin. Video: Dan Griffin 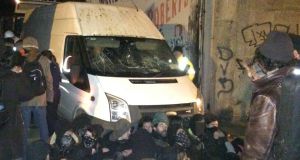 Protesters sitting in front of a van during the stand-off on Grangegorman Road Lower. Photograph: Dan Griffin 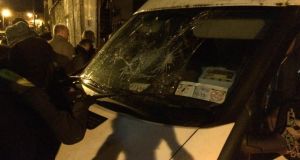 The broken window on a van during the stand-off on Grangegorman Road Lower. Photograph: Dan Griffin 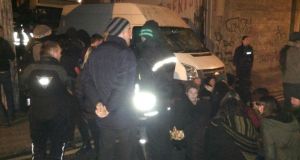 Protesters sitting in front of a van during the stand-off on Grangegorman Road Lower. Photograph: Dan Griffin

A number of people were treated by paramedics during a stand-off at a squatted property on Grangegorman Road Lower, in north Dublin.

Workers had arrived to the area in a number of vans earlier in the day to erect fences but found themselves barricaded into the location by squatters for a number of hours.

At about 9.30pm the workers attempted to drive their vehicles out of the yard in which they had been barricaded.

When the exterior gate on Grangegorman Road Lower was opened and a van tried to leave, the waiting protesters attempted to impede the vehicle and a number were injured.

The windshield of the van was broken, before protesters sat down in front of the vehicle.

Gardaí at the scene then called for backup, with at least 12 gardaí present.

At about 9.45pm two units of the fire brigade and an ambulance arrived at the scene. Paramedics treated an injured man on the ground before putting him into an ambulance.

At approximately 10.45pm the vehicles – including a number of trucks, vans and cars – left the yard unimpeded when the protesters made way.

The protesters then moved into the yard.